The Gyalwang Karmapa Consecrates Land for a New Kitchen 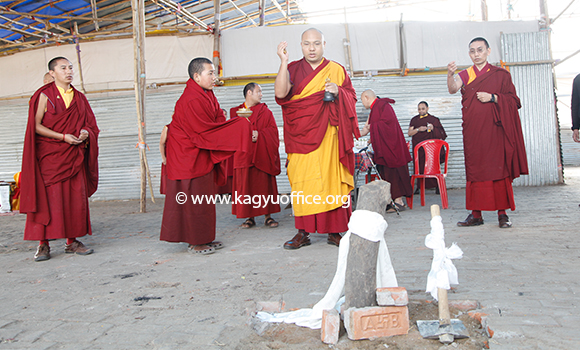 January 26, 2015
Inside the now empty and rambling frame of the Monlam kitchen with the bound lengths of bamboo still supporting deep blue tarpaulins, a small shrine has been set up. On the brocade covered table are two rows of the traditional offering bowls, and in front, a large offering cup on its stand sits next to a plate with a white torma. Not far away, a small rectangular area of earth has been opened in the brick floor.

Around eleven in the morning, the Gyalwang Karmapa comes walking through the nearby field with the young Druppön Dechen at his side and accompanied by a small group of monks. He will perform a special ceremony (sometimes called taming the earth) to request the land and gratify the local spirits. The offerings are divided into three main phases. First, the white torma and a golden libation (gser skyems) are offered to the earth goddess to solicit the land from her. The Karmapa kneels in front of his chair with Druppön Dechen to make prayers. A stick of incense is brought to the Karmapa and offerings are made to the local deities (sa bdag). As he plays the bell and dorje, Druppön Dechen holds his incense while the offering of a golden libation is carried off. The final offering is for the spirits (‘byung po), which include the elemental spirits of the earth, water, fire, and air.

Then the Karmapa rises from his chair and circumambulates the symbolic site of the consecration. He gives the spade, tied with a white kata, to the young Druppön Dechen and instructs him how to make the first ceremonial scoops of earth in the four cardinal directions and the center. The Karmapa ties a long white kata to a wood post anchored in the center of the rectangle and makes the final offerings of rice, tossing it into the air as the prayers for auspiciousness are recited: “May all be auspicious here during the day. May all be auspicious during the night….”