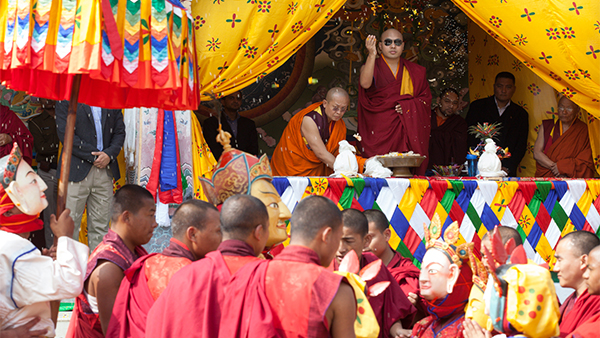 Despite his heavy teaching schedule, the Gyalwang Karmapa slipped away during the lunch break to visit the Cham dancing at the Royal Bhutanese Monastery, Druk Ngawang Thubten Chokling.  The monastery is the seat of the Shabdrung of Bhutan, and belongs to the Drukpa Kagyu tradition.

As His Holiness’ car approached, a line of leaping performers danced out to greet him, forming a unique, Bhutanese-style serbang or ceremonial procession to escort his car through the welcome gate into the monastery grounds and to the temple, where the Abbot and senior monks were waiting for him.

Entering the three-storey temple, the Karmapa first lit two butter lamps as offerings on the altar, and prostrated three times.  At the request of the Abbot, he then consecrated a new Buddha statue, before sitting down on the throne to receive a kusungthug mandala offering, presented by the abbot and senior monks, accompanied by the mother of the young incarnation of the Shabdrung.

His Holiness’ next duty was to consecrate the special Guru Rinpoche mask which was to be used during the Cham, and, in addition, to consecrate two newly-finished wall paintings, one of the Buddha inside the temple, and one on the entrance wall of the temple, illustrating the Kings of the Four Directions.

Outside, to the left of the temple porch, a special seat had been prepared for him, inside a specially constructed golden cloth pavilion, fringed with green, from where he could watch the Cham.  As His Holiness took his place, a dance was already in progress, the Eight Aspects of Guru Rinpoche, and the costumed monk-dancers whirled around the improvised cham ground on the lawn in front of him.

Time was up. His Holiness rose and, smiling kindly at the hundreds of onlookers gathered to watch the event, strode to his car, and returned to Tergar to resume his teachings.