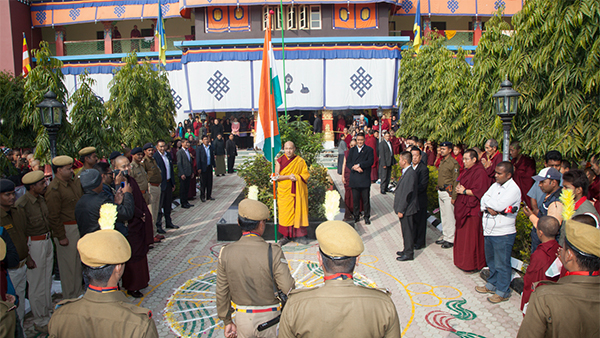 At 9.30am, during the morning tea break, His Holiness momentarily put aside his teachings on Gampopa’s Jewel Ornament of Liberation and went outside for a flag-raising ceremony to celebrate Republic Day. Hundreds of nuns, monks, and laypeople crowded after him to watch. And across India, the peoples of the world’s largest democracy celebrated its 65th Republic Day in similar ways.

On the paved path between the gated entrance to the monastery and the main shrine hall, more than a hundred young monks with their teachers lined up in straight lines and stood to attention.  Smartly kitted in khaki, Army security stood to attention, presenting arms with their automatic rifles. Indian security police, standing straight and tall, saluted. His Holiness stood and watched respectfully, as Bo Gongkar Rinpoche raised the Indian national flag. Emblazoned with Emperor Ashoka’s 24-spoke chakra wheel in navy blue, the tricolour flag —with saffron, green and white panels— has become the symbol of modern, democratic India.

After the young monks had sung the National Anthem and chanted Buddhist prayers for the happiness and well-being of the world and all sentient beings, they enthusiastically waved small national flags. Then everyone returned to their places in the shrine room to enjoy warm spicy milk tea and gooey Indian sweets – ladoo, rasgulla and jelabi.