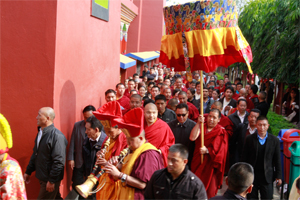 The Gyalwang Karmapa departed Sarnath this morning for Bodhgaya, where he will receive the Kalachakra Initiation from His Holiness the Dalai Lama. During his stay in Bodhgaya, the Gyalwang Karmapa will also offer audiences to the vast crowd of devotees who have gathered from Tibet and across the Himalayan region.

His Holiness left Vajra Vidya in Sarnath before 9am, and travelled back the same route that Lord Buddha first took after his enlightenment. Meanwhile, in Bodhgaya, by noon the road approaching Tergar Monastery was flanked by a long line of Himalayan people seeking to catch a first glimpse of the Gyalwang Karmapa. The white scarves they planned to offer as a symbol of their respect and devotion fluttering in the wind, those eager to receive the Gyalwang Karmapa waited patiently until around 2pm, when his traveling party finally came within their view.

A large yellow parasol hovered above him as the sound of horns announced the long awaited moment of his arrival, as His Holiness’ stay in Buddhism’s holiest site has officially begun.