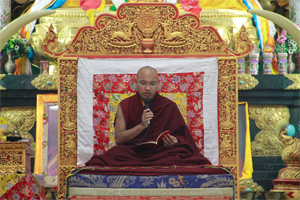 As an auspicious and joyful start to the new year the Gyalwang Karmapa joined the monastic assembly of Vajra Vidya Institute for prayers and practice, including the Offerings to the 16 Elders practice.

Following the prayers, the Gyalwang Karmapa addressed the assembly, which included visiting international disciples as well as the resident lamas and monks of Vajra Vidya. His Holiness spoke first in Tibetan, and then in English.

Echoing his New Years Message, His Holiness noted that there has been a great deal of talk that the year 2012 will be a year of natural disasters and turmoil. We cannot predict what lies ahead and the potential for great change in our environment and in society is indeed present in any given year, he said. He added that our external environment is very important and also a source of great kindness to us.

Whatever upheaval may occur in the world around us, the root of our happiness and wellbeing remains the same. The cause of the health and happiness we desire for the new year lies within each of us, in our cultivation of inner peace and love towards others, the Gyalwang Karmapa said.

Whatever happens in 2012, our responsibility remains the same: to seek ways to make our brief lives on this planet of utmost benefit.

His Holiness concluded by wishing all—in Tibetan and in English—good health and a happy and meaningful life in 2012.