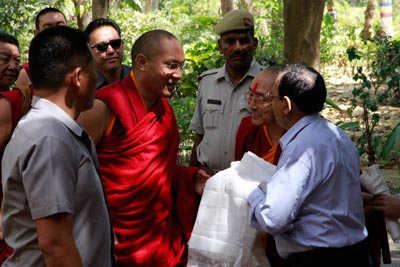 Vice Chancellor Geshe Ngawang Samten gave a warm speech of welcome, praising the Gyalwang Karmapa for the acute sense of responsibility for preserving Tibetan cultures that he has displayed over the years.

In his own address to the assembly, the Gyalwang Karmapa evoked the era when India was the far-away destination for Tibetan scholars and translators seeking Buddhist training and texts. His Holiness pointed out how many hardships these scholars of old had endured in order to have access to the same knowledge that students in India could now study so easily and comfortably at the institute. His Holiness commented that it would appear from our relatively good conditions would suggest that we have more merit nowadays than did the great Tibetan translators of the past. However, using the example of pretas, or hungry ghosts—who may be surrounded by food and drink yet remain unable to make use of them—the Gyalwang Karmapa encouraged his audience not to take the wonderful conditions for granted, but to recognize their great value and use them well. He further urged the students to take personal responsibility and direct their learning towards the aim of preserving Tibetan culture and religion.

Continuing the theme he explored in his spring teachings, His Holiness noted that it ancient Asian cultures had incorporated a notion that education should first work to form good people, and only later, on that basis, focus on developing particular expertise or areas of knowledge. Using the example of scientists who use their knowledge to develop weapons, the Gyalwang Karmapa observed that knowledge when deployed by unscrupulous persons could be harmful. He therefore stressed that first one should lay the foundation of being a good, principled and happy person, and only then engage in serious study.

His Holiness further encouraged the students to study not with the aim of just gaining knowledge for themselves, but rather with the aim of enriching themselves with knowledge to share with others. In this way, study could become a source of happiness, rather than merely a means of gaining fame or a high position in the world.

The morning’s program was concluded with a speech by the highly respected scholar Geshe Yeshe Thogden, who lauded the Gyalwang Karmapa’s message and urged the students to take his words to heart.

Purification Prayers for Victims of the Japanese Earthquake and Tsunami

Against a background of rising numbers of known dead in the Japanese disaster and predictions that the number of dead will exceed 20,000, the Gyalwang Karmapa performed a special purification ritual [jhang chog] for those who had died.

The ritual used was Overturning the Basis of Samsara: A Saddhana from the Condensed Essence of the Guru’s Advice. It is offered to Avalokiteshvara [Tib.Chenresig] the Bodhisattva of Compassion and includes a symbolic burning of the names of the dead.

The Gyalwang Karmapa is seen as an emanation of Avalokiteshvara, so the performance of this ritual by him is believed to be particularly powerful in helping purify the negativities of those who have died, and helping them through the intermediate state towards a fortunate rebirth.