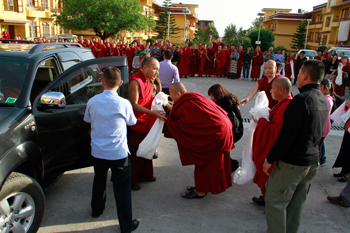 His Holiness arrived back at Gyuto Monastery, his temporary residence, after successfully completing his visit to Sarnath where he gave his Spring Teachings for both Tibetan and international students.

His Holiness will now resume his normal routine of study, audiences and local visits.

More then 300 People from the Tibetan Camp, at Majnukatilla gathered in the hall at Rohini TCV Youth Hostel, northeast of Delhi.

His Holiness first gave the transmission of the Chenresig Saddhana, and then spoke about the urgency of preserving the unique Tibetan culture, during which he urged people to take greater responsibility on a personal, individual level concerning the recent announcement of His Holiness Dalai Lama’s retirement.

His Holiness presided over a special prayer meeting for world peace at this ancient Buddhist site.

He arrived at 4.00pm, and began by circumambulating the outer circle of the Stupa complex, pausing to feed vegetables to the deer, a reminder of the deer who used to live here in the deer park at the time when Lord Buddha gave his first sermon here.

Seated under a golden parasol on the lawn in front of  the Damekh Stupa Gyalwang Karmapa led  half an hour  of prayers for the well-being of all sentient beings, and then completed several circumambulations of the stupa itself. He then walked slowly towards the Mulugandhkutti Buddha relic temple. Inside the temple he sat down in front of the huge golden Buddha and continued prayers.