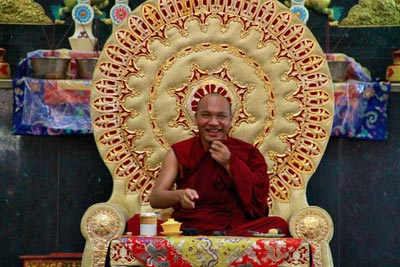 At the request of Khenpo Lobsang Tenzin, Head of Vajra Vidya Institute, Gyalwang Karmapa wrote a short song to be used as the anthem for the Institute, and presented it to Khenchen Yongzin Thrangu Rinpoche during the Lama Choepa on Saturday morning.

At 4.00pm, after the heat of early afternoon had subsided, there was a short celebration in the main shrine room during which the song was performed for the first time by monks of the Vajra Vidya Institute.
Gyalwang Karmapa sat cross-legged and at ease in the golden sun chair he uses for less formal occasions. His senior tutor Khenchen Yongzin Thrangu Rinpoche sat in a comfortable armchair to his left and Khenpo Sogyal, Head of the Kagyu Section at the Central University for Tibetan Studies, sat to the right. The audience was much smaller than in previous days: mainly monks from the monastery, students from the Vajra Vidya Shedra, students from C.U.T.S. , a scattering of Tibetan lay people and a remnant of the international devotees, those who had not needed to leave at the conclusion of His Holiness’ and Thrangu Rinpoche’s teachings.

In contrast to the rigorous seriousness of the previous days of teachings and rituals, the atmosphere was relaxed and informal. His Holiness leant back in his chair, smiling, joking and laughing. Apple juice and Indian sweets were offered to everyone present.

The celebration opened with the Tashi Dargye prayer. A short speech by Khenpo Lobsang followed, in which he praised the qualities of the Karmapas and of Khenchen Thrangu Rinpoche, and thanked His Holiness for blessing the Vajra Vidya Institute with his presence and especially for writing the school song.

Gyalwang Karmapa responded by joking that usually Tibetans look very sober in the shrine room but today everyone was smiling happily and laughing. As it was the Hindu festival of Holi, he wished everyone “Holi Tashi Delegs” and said he considered himself very fortunate to have been able to visit the Institute, and particularly, to have been able to join in the ceremonies commemorating the Kagyu forefathers. Today there would be no pujas but the singing of a song dedicated to Vajra Vidya Institute instead!

His Holiness first reminded everybody of the sacred auspiciousness of Sarnath, the site where the Buddha first turned the wheel of Dharma. He then spoke of the great contribution of Khenchen Thrangu Rinpoche who had founded the Institute for the benefit of beings and created a place where the Dharma of Sutras and Tantras ‘shines like the sun’, a place where the study of scripture combines with practice. In addition, Vajra Vidya Institute held significance for him personally as the place where he had planned and launched many new projects such as preserving the Kagyu liturgy, planning the Kagyu Monlam, holding the first environmental conference which led to the foundation of Khoryug, and so forth. The Sixteenth Karmapa Rangjung Rigpe Dorje had named the monastery, and the newly composed song expressed the hope that the Institute would fulfill his wishes. Monks then sang the song.

Khenpo Sogyal followed with a short, often humorous speech in which he spoke of the Seventeenth Karmapa as one “who makes the impossible possible” , and echoed the commitment of all present: We will follow the Gyalwang Karmapa in this life, and even in the next life. He reflected on how, within a month of the inauguration of Vajra Vidya Institute by His Holiness the Dalai Lama in December 1999, the Gyalwang Karmapa had arrived safely in India. Since then he had blessed the Institute with his presence each year.

The simple ceremony concluded with the aspiration prayer for the well-being of Tibet and dedication prayers.

Midst a retinue of eighty thousand gods and humans,
The protector Shakyamuni discoursed at this place,
Turning the Dharma Wheel of the four truths
At the Deer Park, this blessed and auspicious ground.

Here at this seat of our forefathers, the Kagyu lamas,
Shines the sun of Dharma, sutra and tantra in union.
A thousand lotus petals of learning blossom forth; prayers and activity
For the flourishing of all Buddha’s teachings converge here.

Each and every compassionate intention
Of the lord and lama Rigpe Dorje
Is accomplished at all times, day and night.
May this auspicious glory fill the entire world!

This was written by Karmapa Ogyen Trinley at the request of Khenpo Lobzang Tendzin on the anniversary of Milarepa’s passing, March 17, 2011.