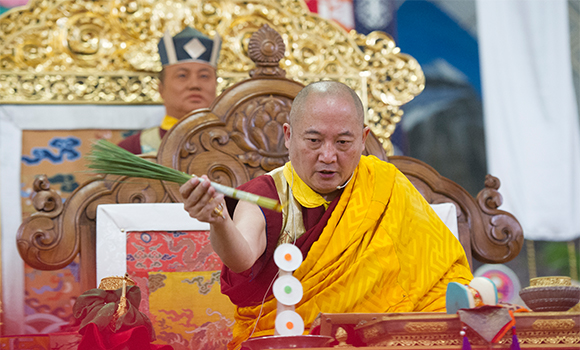 After five glorious days of transmissions the participants are treated to one final empowerment, specially requested by the Gyalwang Karmapa. In the afternoon session on the final day, Kyabje Goshir Gyaltsab Rinpoche offers the Vajrasattva empowerment, bringing the “Knowing One Frees All” empowerments to an auspicious completion.

“This Vajrasattva empowerment will be particularly beneficial for those doing their ngongdro preliminary practices,” the Gyalwang Karmapa had told the participants earlier in the day.

An hour before the empowerment begins Gyaltsab Rinpoche is already on stage, performing the preliminary rituals behind the ornately painted, four-panelled screen. By 2pm the Monlam Pavilion is once more packed to capacity, with more than 10,000people coming together from all over the world, their faces radiant after days of empowerments. The rows of cushions laid out from the front to the rear of the pavilion are full; an extra crowd gathers in the back, where there is now standing-room-only.

To the left of the stage a radiant Vajrasattva statue, seated peacefully in cross-legged posture, now rests inside the exquisite golden mandala-pagoda, with various torma and other offering substances arrayed in front.

Gyaltsab Rinpoche first offers three prostrations before the kingly statue of the 16thGyalwang Karmapa. He then grasps a symbolic mirror and chants the opening liturgies, his voice resonating melodiously around the vast hall, thus beginning the Vajrasattva empowerment.

Gyaltsab Rinpoche instructs those gathered to request the empowerment with a genuine Mahayana bodhichitta motivation, in order to bring all sentient beings as limitless as space to the state of Buddhahood.

A body, speech,and mind mandala for requesting the empowerment is bought forward by representatives of Tsurphu Labrang, led by Chamsingla, the Gyalwang Karmapa’s older sister.

“Compared to all the infinite deities within Vajrayana Buddhism, Vajrasattva is different,” Gyaltsab Rinpoche teaches.

He is more pervasive, more encompassing. And whichever Vajrayana deity we practice, whether it is Kalachakra, Chakrasamvara, or Vajravarahi, we absolutely must practice Vajrasattva along with it. Whatever our Vajrayana practice may be, we must rely on Vajrasattva so that we’re not affected by downfalls,wrongdoings, impediments, and obstacles.

There’s not a single other tantra that does not also mention Vajrasattva. He appears in all the tantras, and for this reason he’s particularly important. Several tantras and instructions also teach that Vajrasattva is principal among all the deities.

Next Gyaltsab Rinpoche explains that generally the more empowerments we take, the greater the power of our virtue becomes.

When we do commit wrongs and downfalls we should immediately use Vajrasattva practice to purify those misdeeds and obstacles. When we do this, the greater number of empowerments we have, then the greater our power to purify.

Gyaltsab Rinpoche repeats the gestures of physically conferring the empowerment one by one for all the eminent rinpoches and lamas on stage. He then stands at the edge facing the participants, and with grand sweeping gestures sprinkles nectar from the bumpa and tosses handfuls of rice in all directions, symbolically conferring empowerment upon all.

Next comes an elaborate mandala offering of thanks, led by the main sponsors, who carry exquisite statues, precious dharma texts, golden stupas, silken cloths, and the like.

At the end of the empowerment the Gyalwang Karmapa approaches Gyaltsab Rinpoche’s throne to offer him a long white silk khata and personal offering, and this time it is Gyaltsab Rinpoche who stands up from his own throne in order to meet him half-way.

The close warmth and mutual respect between Gyaltsab Rinpoche and Gyalwang Karmapa is evident as heart son and master meet in the centre of the stage for a third time, before the incense bearers escort them both out of the Pavilion.