Guru Yoga of the 16th Karmapa : A Feast of Devotional Love 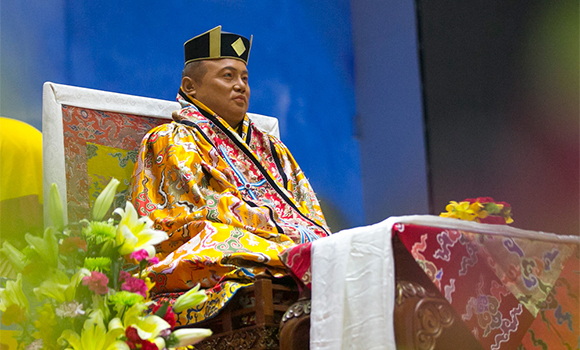 14 February, 2016 -Monlam Pavillion, Bodhgaya
The text for the Guru Yoga practised on the afternoon of the 16th Karmapa Commemoration Day was based on a guru yoga entitled “The Shoot of the Four Kayas,” combined with the Dusum Khyenpa guru yoga that the 17th Karmapa wrote for the Karmapa 900 celebration. He inserted the visualisation from the 16th Karmapa’s guru yoga and the ganachakra from Milarepa’s guru yoga on the eve of the Commemoration Day, celebrated on February 14th.

The 16th Karmapa lived during a golden age when the world was freer and more open than it is today and it allowed his activity to happen spontaneously. He gave very few formal teachings but taught instead through his presence. In the age of peace and love, he was a living example of all-embracing love and compassion, so it seemed appropriate that his commemoration day fell on February 14th, a day celebrated for love. The 16th Karmapa was both universally loved and highly venerated. Guru yoga was the main practise of his many devotees whose hearts overflowed in supplication and the three lights of blessing from his body, speech and mind intermingled. His heart came out of the cremation pyre, unburned by the flames and was enshrined in a stupa at Rumtek, where it was said to grant all wishes. He even appeared in dreams and visions to his devotees after his parinirvana. For many 60’s spiritual seekers worldly love was truly transformed into spiritual devotion. For Tibetans, guru yoga was always the heart of the path.

The stage was set with a 12 foot high stupa made entirely of tsok in the form of red apples. The statue of the 16th Karmapa was in front of the Buddha and his image in Black Crown splendour also appeared on the large screen. The 17th Karmapa entered, placed a katag on the table in front of the 16th Karmapa and then sat at a small table on a cushion in the centre with his assembly of monks.
The Vajradhara Lineage Prayer started the 2 hour supplication to the guru that opened the heart in an ever increasing litany of devotion. Lamas and monks from all traditions, nuns, laypeople clad in white – Tibetan, Western, and Chinese – filled the hall to overflowing, pulsing to the varied notes of devotional heart-felt prayer. A large screen reproduced the lines of the text which the assembly chanted in unison.

After taking refuge, arousing bodhicitta with a prayer for the happiness of all sentient beings, purifying with the vajrasattva mantra, and reciting the 4 line mandala offering we came to the heart of the practice – the essential mahamudra supplication to the guru:

I pray and supplicate my precious lama
Bless me that my mind may let go of belief in a self
Bless me that contentment may arise in the stream of my mind
Bless me that non-dharmic thoughts may cease.

As the assembly chanted Karmapa Chenno, a photo of the 16th Karmapa appeared on screen.

Bless me that my mind become one with yours. Bless me to achieve clear appearance in the great yoga, the unified body. Bless me to know adversity as siddhi and see all that appears as the dharmakaya. Bless me that the afflicted appears as wisdom and gain mastery over the wheel of ornaments, the inexhaustible body, speech, mind, qualities, and activity of the perfect buddha, the great and glorious Karmapa.

Nuns with glowing faces from Drupde Palmo Chökyi Dingkhang Nunnery in Bhutan sang in high clear voices, holding ganachakra tormas, their voices, like dakinis, making the offering of pure sound.
The closing prayers for auspiciousness made the final wish:

May the teachings of the Practice Lineage flourish!
May the world have the good fortune of happiness!

May every February 14th be celebrated as the 16th Karmapa Guru Yoga day, a time when attachment transforms into devotion and passion into compassion.

The ninety two year old Khenpo Khatar Rinpoche left in a wheel chair, smiling, while the Yangsi Bokar Rinpoche skipped out after him.