Tibetans celebrated an official function in Dharamsala, to mark the occasion called “Thank you India”.

The functions are part of a series of events being organized by Tibetan exiles to commemorate their 50 year’s in exile and to reaffirm commitment in their struggle for freedom.

In Dharamsala, the function showcasing Tibetan cultural songs and dances by school children was attended by senior officials from the Tibet’s government-in exile and representatives from the Indian community.

At the request of Tibetan Welfare Office, His Holiness Karmapa chaired the function and presented souvenir to the Chief Guest of the event Mr Kishan Kapoor, transport minister, the Government of Himachal Pradesh. 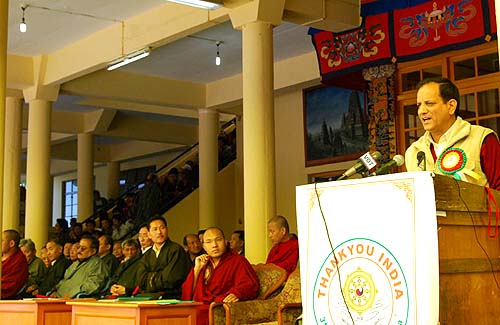 His Holiness Karmapa looks on as the Chief Guest Kishan Kapo speaks at a “Thank You India” function in Dharamsala,