A Mandala That Brings Happiness and Benefit to Animals: Inauguration of Extended Veterinarian Camp Programme in Bodhgaya 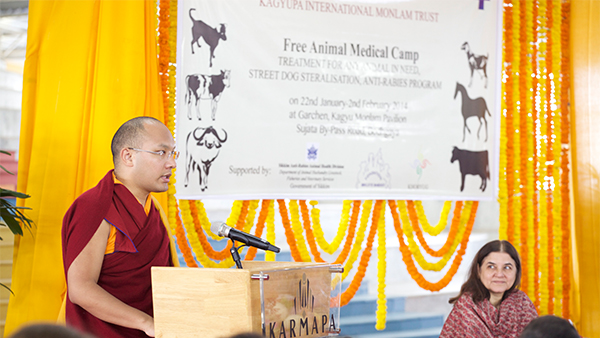 Smt. Maneka Sanjay Gandhi was Chief Guest  at the inauguration of this new initiative  by Kagyupa International Monlam Trust aimed at  alleviating the suffering of  animals in Gaya District, Bihar,  and thereby improving  the health of the local human population too. Mrs. Gandhi has been a long-standing member of the Parliament serving as a minister in four Governments, and is renowned for her love and care for animals.  During her political career she has worked to pass important legislation, including specific measures to protect the environment, to promote social welfare and to protect the rights of animals.  She helped set up new institutions such as the National Zoo Authority and the Animal Welfare Board of India.  She also runs her own animal sanctuary in the heart of New Delhi, named in honour of her late husband, Sanjay Gandhi. This sanctuary, established in 1983, is the largest of its kind in Asia and cares for 3000 animals at any one time.

The ceremony opened with a speech by Dr Catherine Schuetze, the veterinarian overseeing the project. Dr Schuetze spoke first of interconnectedness, a primary Buddhist concept, and how it was evidenced in the relationship between animal health and human welfare.  Secondly, at the heart of Buddhism is compassion for all sentient beings, as expressed in the prayer “May all beings be happy”. This wish included animals.  She reminded people that the great Mahatma Gandhi-ji supported caring for and protecting animals, and the 17th Gyalwang Karmapa Ogyen Trinley Dorje had proved himself to be a strong advocate for protecting animals and the environment. She explained how a two-week camp was seen as insufficient. Hence, the decision had been reached to extend the project. In future, the veterinarian camp will be held annually in Bodhgaya. The camp was not limited to the ABC-AR programme, but included an outpatients department; out-reach programmes where the vets visited local panchayats; and  an education programme aimed specifically at children to teach them how to avoid being bitten by dogs and how to prevent rabies. [Full text of Dr Schuetze’s speech]

Next at the podium was His Holiness the 17th Gyalwang Karmapa. When the Buddha attained enlightenment under the Bodhi tree in Bodhgaya, His Holiness explained, “he realized that all sentient beings have the same value and their lives are all the same in worth”. This compassion for all sentient beings, moreover, could be seen as having its roots in “the ancient wisdom and compassion of India”. It was His Holiness’ great hope that the veterinarian camp would become

“a mandala or pure realm for bringing benefit and happiness to animals”.

“Humans have often treated animals badly. I have the great hope that we can decrease that, and that an understanding that animals are members of our family in this world can spread everywhere, “he concluded.[English translation of Gyalwang Karmapa’s speech]

Smt. Maneka Sanjay Gandhi spoke of the occasion as “history in the making”. Expressing her deep respect for His Holiness, she said, “Every so many years one spiritual being in the form of a human comes to change history, to make religion more centred, to bring it to its original path, and I believe that Karmapa is amongst those beings who has come to help us realize ourselves.”

She then developed the theme that all forms of life are deeply connected with delightful images of a little ant yawning when she wakes up and a mouse laughing when it’s tickled. However, she introduced a new perspective by reminding people that if they believed in reincarnation, they had a vested interest in protecting animals and improving their living conditions. “I have been a tree, I have been a donkey, I have been a dog, I have been a horse, I have been a snail, I’ve been a fish,” she proclaimed.   Who knew what they might be next life?  So, looking after the welfare of animals was a form of enlightened self-interest. But more than that, it was self-evident that the welfare and happiness of animals was intrinsically linked with the welfare of humans.“We need to understand we are them, they are us,“ she declared.  “I believe that if we are going to make the world a better place for humans, then we have to make it a better place for every living being.” Enthusiastic applause confirmed that her audience supported her views. [Full text of Smt. Maneka Sanjay Gandhi’s speech]

The next speaker was one of the veterinarians, Dr Thinley, from the SARAH programme in Sikkim, who gave an overview of this programme, its scientific and ethical bases, and its success. Speaking from the heart, he admonished everyone, “Animals have been associated with and benefited humankind for thousands of years.  We are very selfish indeed.  We forget that these speechless creatures have served human kind without expecting anything in return and we don’t really care for their welfare and wellness.”  [Full text of Dr Thinlay’s speech]

Finally, Lama Chodrak, CEO of the Kagyupa International Monlam Trust spoke briefly, thanking everybody for their support and appreciation of this new venture in Bodhgaya.

The Chief Guest and His Holiness the Gyalwang Karmapa, accompanied by Guest-of-Honour Sri. Namzey Dorjee, secretary of the Bodhgaya Temple Management Committee, and other VIPs then trudged across the field, now much drier than the muddy morass left by heavy rain a few days ago, to the tented area of the Animal Camp, where they were able to meet the vets and para-vets, and watch them in action.