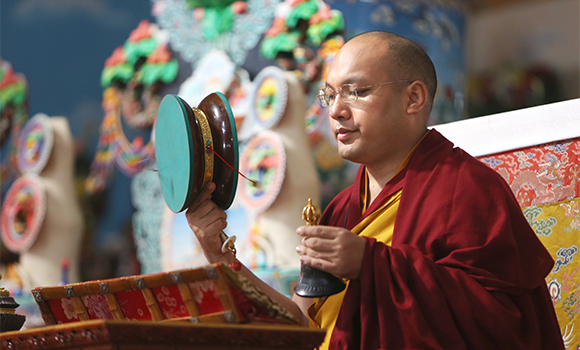 In one of the key rituals of the Arya Kshema Winter Dharma Gathering, and a particularly rare and precious opportunity for those gathered, the Gyalwang Karmapa led an extended day-long Chöd puja.

“There are both masculine and feminine Chöd practices,” he said in the lead up to the puja. “This Chöd practice was passed down from Machig Labdrön, so it’s a feminine practice, and I thought it would have particular meaning for us to do it during the nuns’ Winter Dharma Gathering.”

Chöd is renowned as a practice lineage established by a woman, the enlightened female master Machig Labdrön, and female practitioners have traditionally excelled in the practice. However, the Gyalwang Karmapas have historically had a particularly close connection with Chöd practice, and are direct holders of the Chöd lineage. His Holiness the Seventeenth Gyalwang Karmapa has been enthusiastic about Chöd practice from a young age.

The Gyalwang Karmapa arrived in the Tergar shrine room at 9am to preside over the puja, and remained on his throne for most of the day, until the puja finally concluded around 5.30pm.

The text, called Chöd: A String of Jewels, was composed by the third Karmapa, Rangjung Dorje. The extended ritual guides practitioners in a detailed practice designed to cut through our attachment and ignorance—particularly our gross attachment to the body—through the means of prajña or wisdom that realizes emptiness.

The Tergar shrine room was filled to bursting point with people eager to take part in the Chöd puja, spilling out onto the surrounding balconies. Many carried their ritual implements, consisting of special ‘chodar’ damaru drum and bell, while a large group were clothed in the white and red ‘ngagpa’ robes of lay tantric practitioners.

Inside the shrine room rows of raised platforms were arranged facing inwards for the nuns, with many monks also filling the remaining rows of cushions behind them. Jamgon Kongtrul Rinpoche once again sat in a throne at the Gyalwang Karmapa’s own right, at the head of the first row.

After an auspicious opening with the Guru Rinpoche prayer, the beautiful voices of the female umzes soared through the melodies, leading both male and female practitioners alike through the ritual. The effect of hundreds of chodars and bells resounding in perfect unison was powerful. This display of unity served as a visual and aural reminder of the single, focused intent of all the circles of disciples present—both male and female, monastic and lay.

The rising and falling melodies of the Chöd puja were perfectly suited to the female voices, which remained clear, bell-like, and unwavering throughout the day. Nuns performed all the key roles in the puja, such as chantmasters, playing the haunting thighbone ‘kangling’ horns, as well as the huge ‘ngachen’ puja drums.