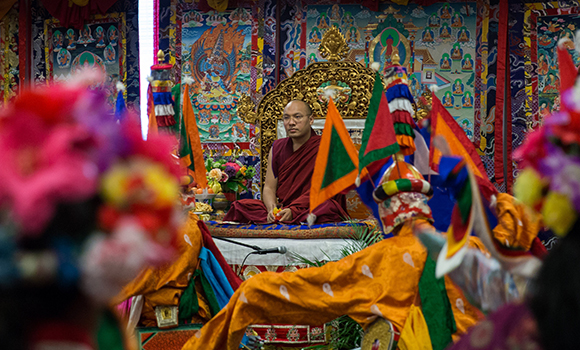 May 26, 2106 -Zurich, Switzerland
The Karmapa began this day of a dance performance and audiences by meeting with a group of over ninety Tibetan Kagyu practitioners. He gave them the transmission of Guru Rinpoche’s mantra and that of Avalokiteshvara, the two yidam deities with whom he is most closely associated. After he was offered the supports of body, speech, and mind, and supplicated to live a very long life, the Karmapa gave the group his heartfelt thanks for all the tireless work they did to organize his visit.

The second group to offer their white scarves was students from the University of Zurich. Tashi Dolma, the president of this Students’ Working Group for Tibet, explained that the association of some thirty students had initially started in the 1980s, but had lapsed until last March when they decided to revive it. She said that they felt especially blessed that their plans had coincided with the Karmapa’s visit. The purpose of the group, she remarked, was to bring the issue of Tibet into the academic world. The students who came today are pursuing variety of courses, such as law, economics, international relations, computers, sinology, psychology, and the environment. In the future, they hope that all their efforts will come to benefit Tibet.

The afternoon saw a spirited performance of the Lingdro Dechen Rolmo by the Kunzang Dongak Ling Tsechu Tsokpa, which keeps alive these dances related to the great Tibetan hero Gesar of Ling. The occasion began with the offering of teaching by Jampa Rinpoche, the spiritual head of the group. He spoke of the traditional five perfections from the special perspective of the profound Nyingma teachings, seeing the five as an aspect of the spontaneously present three kayas of the Buddha.

The performance began as a classic puja, led by Jampa Rinpoche, who was the chant master; a blessing of the offerings was followed by a beautifully decorated torma (butter sculpture) presented to the local spirits. Vast offerings were visualized and a request was made for the granting of siddhis. The first performers to appear were a man carrying the traditional offering of roasted barley flour and a woman carrying a bowl of nectar decorated by flowers fashioned from butter.

With a great clash of the symbols, the first male dancers appeared in glorious brocade robes and Gesar hats⎯four bright flags set in the four directions and a victory banner standing upright in the middle. They also wore a quiver of arrows, a jewel encrusted sword, and a large gao (reliquary). The women entered from another side, wearing long brocade chupas (Tibetan dresses) and a crown of flowers that cascaded in a rainbow of colors. They carried long life arrows, wrapped in silks of five colors. The dance moved along with antiphonal singing, one verse sung by the men and another by the women.

Afterward a young western girl performed a song in Tibetan, and a Tibetan girl, whose hair was covered in long strips of amber following the custom of Eastern Tibet, sang a song ending in, “Apo Gaga (the Karmapa’s name as a young boy about her age), you are my lama.”

The final dance was one of spreading auspiciousness to the four directions. The dress of the dancers matched the usual colors of the directions⎯white, golden yellow, red, and green⎯and they carried drums to keep the tempo and send out the blessings. After tea and rice was offered to everyone, the Karmapa was asked to address the group.

He first expressed his gratitude to the organizing group and especially to the performers. He praised them for keeping alive this tradition, which dates back some 100 years; more than three generations of people have studied the music, sung the songs, and performed the dances. The Lingdro Dechen Rolmo, based on a vision of the great master and scholar Ju Mipham Rinpoche, is also performed in India, he noted. The Karmapa encouraged the group to sustain this precious lineage and made the aspiration prayer that it will continue for many generations to come. The ceremony concluded with a mandala offering as a thanksgiving for the Karmapa’s presence, given by members of the group wearing the red and white striped shawl typical of Nyingma tantric practitioners.

The final event of the day was a meeting with over sixty westerners who are Tibetan Buddhist practitioners living in the German-speaking area of northern Switzerland. Mostly practicing in the Kagyu tradition, they included members from the Rigpe Dorje Center, the Vajra Vidya group, the Karmapa Foundation Europe, the Shambhala center, Ganden Chokhor, and Nangten Menlha.

A member of the Rigpe Dorje center, Parami, welcomed the Karmapa and thanked him for coming. In particular people were especially grateful to him, she said, because his presence had provided the occasion for all the Kagyu practitioners to gather together for the first time. She then asked the Karmapa to give them advice on how to strengthen and develop the kagyu groups in Switzerland.

The Karmapa responded that when we are practicing, a spiritual master is very important, and essential as well are good relationships between their disciples, who are considered to be Dharma brothers and sisters. “The more we can know each other well,’ he said, “the better it is.” He also counseled, “We have all received teachings from different lamas, and we can talk about these with each other and share our experiences. This will help to inspire us on our spiritual path, which we walk together.”

The Karmapa also suggested reaching out to make connection with the Tibetans, who have been in in Switzerland now for more than fifty years. Everyone can work together and plan a variety of activities. Mentioning that it was his first visit to Switzerland, the Karmapa said that he hoped to come back in the future when they would have more time to spend together. The session ended with a group photograph and offering of scarves. So ended a day what spanned East and West, bringing people together through the Dharma and dance.