The Gyalwang Karmapa Speaks to Tibetans in Geneva 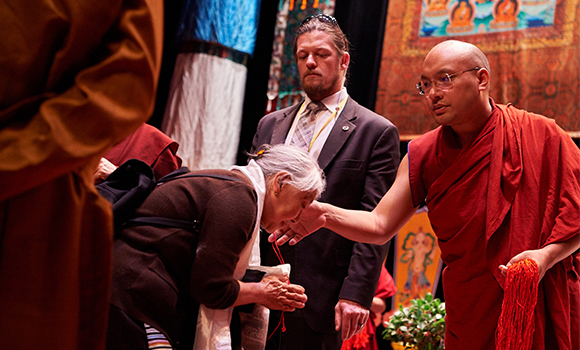 May 21, 2016 -Geneva, Switzerland
Following his afternoon talk, the Karmapa spoke with about hundred Tibetans who live in the Geneva area, augmented by those who came from farther afield to be present today. He conversed with them in great sympathy for the problems they face wherever they might live, in India, Tibet, or other countries of the world. He encouraged them not to give up on their hopes but to sustain their enthusiasm and make efforts until these hopes were fulfilled.

The most important thing, he said, was to maintain their Tibetan language, which gives them access to the Buddhism of Tibet and to their culture. Those with children should teach them as much as they can. Finally, he counseled the Tibetans to support each other, giving assistance when needed and being affectionate and kind.

Afterward, a cultural performance of Tibetan dance and song by the younger generation took place on the stage while the Karmapa watched with pleasure. Then he descended from the throne to stand in the middle of the stage so that everyone had the opportunity to pass by him, offering a white scarf and receiving a blessing cord from him. As the crowd left the theater, there was a palpable sense of happiness as groups of friends departed for their homes.