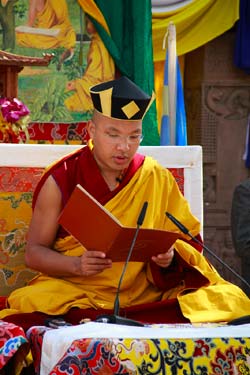 SESSION TWO:
TEACHING BY THE GYALWANG KARMAPA
The King of Aspirations: The Noble Aspiration to Excellent Conduct

Upholding the Dharma means Taming Our Minds
As usual the second session began with prostrations to the beat of a wooden bell, followed by the refuge prayer, and a mandala offering to His Holiness.

An extensive list of sponsors, read while the tea servers skilfully eased their way between the crowded rows of monks, nuns, and laypeople, was interrupted by two offering prayers, the first in Sanskrit, the second in Tibetan, then the reading of the list continued while people sipped their butter tea and munch on soft white bread rolls.

Gyalwang Karmapa began by reminding everyone that saving ourselves from the suffering of the lower realms and samsara while neglecting other sentient beings is not sufficient. Bodhicitta is essential and the root of bodhicitta is great compassion, which is non-partisan and offered freely to all sentient beings without distinction.

Then he asked the assembly to check their motivation for attending Monlam. Has it become a mere habit? Something we have to do at this time each year? It is important to have the correct motivation, he warned, to be committed to and focussed on the purpose of the Monlam, and otherwise attending the Monlam is of little value.

Conversely, we should understand that virtuous actions, even if we only do one or two or they are small, can still be a very powerful purification. If someone falls down, you pick them up. Similarly, we need to purify our bad karma, and Bodhgaya is the best of all places to do it. The practice of Vajrasattva is very good for purifying negative deeds resulting from the afflictions during this lifetime. During the 28th Monlam he will give the Akshobhya Empowerment, and the Akshobhya Purification Ritual is the best way to simultaneously purify negative karma and accumulate merit. However, reciting sadhanas will bring no benefit if we fail to recognise and regret our misdeeds. Virtue arises in an unclouded mind and that’s why it is stronger than non-virtue.

His Holiness then told a story to illustrate the importance of acknowledging our faults.

Once upon a time, two monasteries – let’s call them A and B- stood atop a mountain. The monks in A were an unhappy lot, always arguing and falling out with each other, whereas the monks in B were the opposite, always happy and smiling, living harmoniously with each other.

Concerned by the great disparity between the two monasteries, the abbot of A set out for B to investigate.

At B he met one of the novice monks and said,

“I hear that in your monastery everyone’s really happy. Why?”

Without hesitation, the little monk said,

“That’s because we always make lots of mistakes.”

The abbot was very puzzled by this answer then he witnessed the following incident. One of the monks was washing the floor. A second monk appeared, lost his footing on the wet floor and fell down. Immediately, the first monk rushed over and helped him to his feet, exclaiming,

A third monk came over to them, protesting,

“No, no, it was my mistake for telling you to wash the floor.”

Finally, the one who had fallen over said,

Then the abbot understood what the little monk had meant.

If someone makes a mistake, admits it and recognises it, it makes for harmony, but if people walk around being too proud to admit when they are in the wrong, it makes for conflict.

The 4th branch of the Aspiration is the branch of rejoicing. The text lists five groups:

And I rejoice in all that is the merit
Of all the victors and the buddhas’ children,
Of the self-buddhas, learners and non-learners,
Of all the wanderers of the ten directions.

The last category refers to ordinary beings and their accumulation of merit. We should rejoice in this with neither pride nor jealousy. Gyalwang Karmapa then explored the importance of rejoicing as one of the greatest practices: it encourages us to be virtuous; rejoicing in great merit is meritorious in itself; the greater we rejoice, the more merit; it is the antidote to jealousy, one of the most harmful afflictions.

Returning once more to a theme which has run through this and his earlier teachings during this year’s Monlam, the Gyalwang Karmapa said that it was wrong to rejoice solely in the virtues of our own school and the virtuous acts of our own lineage masters while ignoring the virtues of masters in other schools. As all the teachings of the Buddha and bodhisattvas hold great virtue, such a sectarian view amounted to abandoning or rejecting the Dharma, and, as prophesied in the sutras, such conflicts would cause a decline in the teachings.

What then does it mean to uphold the teachings? To tame your mind. Apply the antidotes, then you are upholding the teachings. Train in the three trainings: listen, reflect, meditate. And rejoice in the good that is done by all people.

Returning to the text itself, the next request is to turn the wheel of dharma:

I request all those guardians who have
Wakened to buddhahood and found detachment—
The lamps of the worlds of the ten directions—
To turn the Wheel that cannot be surpassed.

The meaning of ‘turning the wheel of Dharma’ depends upon our perspective. Sometimes our pride can cause an obscuration of the Dharma, commented His Holiness.

The Dharma of the Buddha is like the wheel on the chariot that will take us to the other side of samsara, but the cart won’t move until we turn the wheel. Only then can we escape samsara. We have to respect every word of the Buddha, and also respect the Lama. It is also important to teach people at an appropriate level so that they can follow the steps along the path. Within the whole world realm every part, even the smallest particle, is encompassed within the Buddha’s teaching, and is pervaded by the activity of the buddhas and bodhisattvas, in every part of the universe. We have the great fortune to have the opportunity to encounter this vast Dharma, and having considered the benefit, we have to ask for the wheel of Dharma to be turned.

Following his enlightenment, Lord Buddha spent 49 days in the forest without speaking; he thought that the Dharma he had realised might be too profound for ordinary people, and then someone requested him to teach, and after that, he did. We have to be like the Khenpo, ardent for knowledge of the Dharma, who went from Lama to Lama pleading, “Please teach me this text…Please teach me that text…” In the Vinaya Sutra the Buddha says he does not do what he is not asked.

The next part of the text contains the request not to pass into nirvana:

With my palms joined, I supplicate all those
Who wish to demonstrate nirvana to stay
As many aeons as atoms in the realms
To aid and bring well-being to all wanderers.

Shakyamuni Buddha first developed bodhicitta then spent three kalpas gathering the accumulations, before he finally became enlightened. The Buddhas manifest in the sambhogakaya [the enjoyment body, of bliss and clear light] for those who have purified their minds, other buddhas and bodhisattvas, and in the nirmanakaya [the created body, which appears in time and space] for ordinary beings.

Requesting the Buddhas to stay to teach the Dharma is very important. Ordinary, childish individuals cannot be taught by the Buddha, and, Shakyamuni Buddha passed away 2500 years ago, so we do not have the fortune to meet him. Though there are an innumerable number of Buddhas, the people we can ask for teachings are our spiritual friends, the Lamas. We should recall the qualities of all the Lamas who uphold the teachings and appreciate the, which is why the Monlam included a remembrance of the kindness of Khenchen Yongzin Thrangu Rinpoche, Dorlob Tenga Rinpoche and Khenpo Tsultrim Gyatso in a special ceremony on the eighth day.

Gyalwang Karmapa reminded everyone that for us the kindest lamas are in the practice lineage, but also, in particular, we have the Dalai Lama, who is praised as being a second Buddha. If we have the wonderful opportunity to see his face and hear his words, we have immensely good fortune, but we often don’t realise this, in which case it has no meaning for us.

At this point, Gyalwang Karmapa returned to the importance of taking responsibility to transform our minds. All of the practices [in the King of Aspirations] beginning with prostration and progressing down to the request not to pass into nirvana, are, essentially, practices we can all do and methods for taming our minds.

Every word of Dharma has the power to tame our minds.

Once more, His Holiness used a story to make everyone laugh and bring his message home.

Once upon a time there was a man with a huge, suppurating boil on his neck, so he went to consult Drukpa Kunley, who told him he needed to make a torma for it, so the man made a torma. Then Drukpa Kunley told him to throw the torma away.

“How can I throw the torma away? Where could I throw it?” asked the man. “There are buddhas in all of the ten directions.”

He took the torma and threw it really hard at the man. It hit him on the neck, burst the boil, and the pus was released.

Our internal enemy is the afflictions and the three poisons, so we need to review our progress each month, to make sure that the instructions we have received and the mantras we recite are working. The principal point is whether we can tame our minds or not. Taming our minds is not instantaneous, and it’s not something which can be bought, but, whatever we do, that should be the aim in our minds. If we forget this and put the Dharma aside and use the practice to work for a different aim, it is very difficult for the Dharma to be effective.
An example might be reciting Tara because we want children, or wanting a new house. These worldly aims are not commensurate with the aims of the Dharma, so such a practice ceases to be a Dharma practice. We need to use our body, speech and mind, for the aims of the Dharma.

In a holy place such as Bodhgaya, many people circumambulate, prostrate, and light butter lamps and so forth, but whether such are virtuous or not depends on our attitude. Our annual pilgrimage here is an ideal opportunity to review the year that has passed—remember misdeeds we need to regret, rejoice in the virtue we have created, and aspire to do better in future.

The short meditation was on generating the wish to liberate all sentient beings. First we should remember the kindness of our parents, or those who had shown us love, those who have nurtured and helped us. Even consider the wider environment and all the living things that support our lives.

Recall that there is not a single person here who has not been our parent or our best friend.
Generate the wish to liberate them from the suffering of samsaric existence.

The final instruction: Don’t go to sleep! We should sharpen our minds, focus in meditation.