There is Not a Moment to Lose Day 3: Teachings on One Hundred Short Instructions 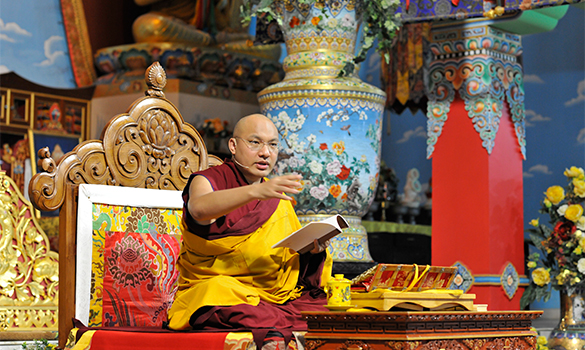 1 December, 2014
This chapter Vast and Profound Light: Instructions on the Two Types of Bodhichitta began with the fundamental importance of Guru Yoga on the path to enlightenment, followed by instructions on the first of the four meditation topics which form the common preliminary practices of Tibetan Buddhism. Their purpose is to ‘turn the mind to dharma’, and the first topic is the precious human life.

In yesterday’s discourse, the 17th Karmapa explained how a human life in and of itself is not necessarily a precious human life. Many people face obstacles or lack the conditions needed for practising dharma. Indeed, it is a rare achievement to attain a precious human life, like a blind sea turtle who struggles to the surface once in a hundred years and yet manages to put his head through a yoke floating on the ocean swell.

Having established the difficulty of gaining a precious human body with all the ‘leisures’ and ‘resources’ that are needed in order to practise the dharma, the text now reflects on how easy it is to waste this opportunity. People become distracted by mundane purposes. Their motivation is distorted by the eight worldly concerns, and even their dharma practice becomes a means solely of furthering goals for this life.

“If we do not use the opportunity to practice the path we are wasting our lives,” the Karmapa warned.
The text turns to the second topic of the four common preliminary practices, impermanence and death. The purpose here is not to discourage or depress the listener but rather to reinforce what has been said already. To have the opportunity to practice the dharma is a very precious gift, and because we do not know what will happen to us, because our human lives are so fragile, there is not a moment to lose.

The meditation on impermanence begins with a description of the universe from Buddhist cosmology. It raises the question if something as vast as the universe changes moment-by-moment and can be destroyed, how can we delude ourselves that our lives, which are as fragile as a bubble, will last forever?

People put so much effort into living their lives, but of all the beings who have ever lived, not one has not died. Some die young, some old, some in the prime of life. With every birth comes the certainty of death, and we do not know when we shall die.
This is followed by a meditation on the charnel ground, imagining what will happen to our bodies when we die. All the things we strove to acquire in life, our possessions, our family, our friends, have to be left behind. In a sky burial, our bones are cracked open and crushed, and scavengers eat our flesh and drink our blood. If our bodies are cremated, they turn to ash. If thrown into water, the fish will eat them.

While we have the chance, we should supplicate the Lamas for their blessings, abandon the eight worldly concerns, and dedicate ourselves to virtue.

His Holiness’ commentary on this section emphasised that when we have achieved what is so difficult to achieve, a precious human life, we need to apply ourselves diligently to dharma practice, because this is the essence of its preciousness. If we do not use our precious human life for its intended purpose, it becomes like a beautiful jewel hidden away in a box, or a $100,000,000 dollars stashed under the bed—pointless and of no use or value.

This is a matter of urgency. “If a snake or a scorpion appeared in our lap, we would get rid of it very forcefully,” His Holiness said. This is how we should practice the dharma.

Reviewing the text, the Karmapa reinforced the idea of the inevitability of change and death. He spoke of the need to get our priorities right.

“People think, “I have to do my job then I can do dharma practice…they put effort into worldly activities,” he said, “But there is always the danger that when you procrastinate, you might die first!” History is full of examples of things which were postponed until later, and then death intervened.

“We need to think what is the most meaningful thing we can do in this life,” he urged.
“The only thing that is certain is that we will die. All that is born will die. Birth itself is the condition for dying…we breathe in and then out, but there’s no guarantee that we will take another breath. It’s amazing that we are still alive!”
The point of this type of contemplation, he insisted, was not to make us panic about dying, but rather to give us some feeling of urgency. Time is short, so we should never put off doing the things we wish to accomplish. Otherwise, at the moment of death, we will be full of regret.

The Authorship of the Collected Topics Text
In the second part of the session, when His Holiness primarily addresses the monks on topics concerning the Gunchö, he gave a fascinating account of the detective work and scholarship involved in finding the root text used for the Collected Topics study books, and how the evidence was collected to establish that the root text was indeed written by Chökyi Wangchuk, the Sixth Shamar Rinpoche.

The Karmapa explained that it was only when he came to India that he first heard about a text on Collected Topics composed by the Sixth Shamar Rinpoche. Jamgön Kongtrul Rinpoche cited the text in his Treasury of Knowledge and Situ Panchen also mentioned it in one of his texts.

The Karmapa was told that the text had most probably been preserved in the Gelugpa tradition, and, subsequently, it was found to exist in three versions, including one in a book published by Tashilhunpo Monastery. In the Tashilhunpo version there is a colophon attributing the text to Jamyang Shepa. Jamyang Shepa was the name of a 17th century Gelugpa scholar, Ngawang Tsondru, whose texts are still studied at Drepung Gomang and Drepung Deyang, two of the great Gelugpa university colleges. It had, therefore, been concluded, that this text had been written by him. The colophon also gave the name of the monastery where this text was composed. This was problematic, because there was no known connection between the Gelugpa Jamyang Shepa and that particular monastery. This raised doubts about his identification as the author. Furthermore, within the text, some of the terms used are specifically Kagyu not Gelugpa, such as ‘the great Madhyamika’, a term for the shentong view which is not accepted by the Gelugs who hold the rangtong view.