The Long Life Empowerment of the Three Roots Combined

Then Goshir Gyaltsab Rinpoche introduced the empowerment with a brief explanation:

I’d like to ask everyone here to listen today with the attitude of bodhichitta thinking that it is for the sake of bringing all sentient beings to the state of Amitayus that you are receiving this empowerment. Today I am giving you the empowerment for the Three Roots Combined. It is a sadhana where we practice the guru as the form of Amitayus, the yidam deity in the form of Chenrezig, and the protector in the form of Bernakchan, united in a single body. When the third Karmapa Rangjung Dorje was resting in non-dual equipoise, or samadhi, at that point he received the blessings of Guru Rinpoche, Padmasambhava, and had a pure vision of the three roots combined into a single body. He realized, he had a vision that he himself, Rangjung Dorje, was the same as the three roots. At that time the mantra of that practice also appeared in his mind. This is the pure vision that he had.

Later, the Eighth Karmapa Mikyo Dorje, when he was practicing and resting in samadhi, also had a pure vision of receiving the mantra of the three roots….Then the 9th Karmapa, Wangchuk Dorje, wrote a ritual liturgy for this and practiced it as well.

Later the great terton or treasure revealer, Chokgyur Lingpa, also received this practice as a revelation or terma. The practice has the same deity and the same mantra and though the ritual is a little bit longer, otherwise it is the same. The practice that came from the mindstream of the Karmapas and the revelation of Chokgyur Lingpa are the same, and since Chokgyur Lingpa’s had some other aspects to it, all this came into the practice lineage of the Karma Kamtsang. When you receive this empowerment, since it is an empowerment of the gurus, the yidam and the dharma protectors at the same time, it is more potent and a more beneficial empowerment than other empowerments.

With that, Gyaltsab Rinpoche graciously bestowed this auspicious long life empowerment on all the fortunate ones in the assembly. At the end, dutsi and special long life pills made out of tsampa were passed out to the audience for blessing. At this point, Gyaltsab Rinpoche donned his Gampopa hat once more and a formal mandala offering was presented by the Kagyu Monlam CEO, Lama Chodrak, as well as the Karmapa’s sister, Chamsing-la, Khenpo David Chophel, Khenpo Tengye, Lama Chophel and others.

This completed the Long Life Empowerment of the Three Roots Combined. 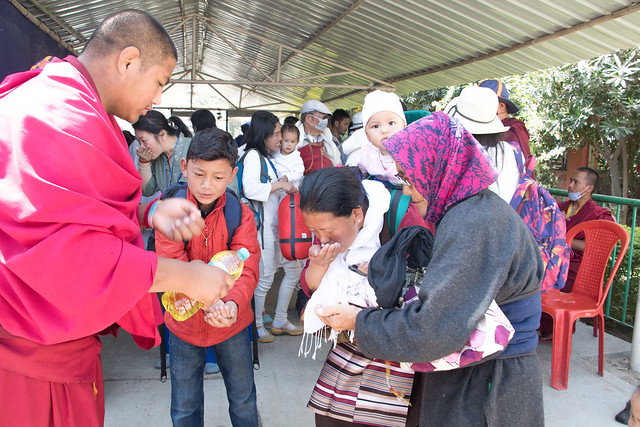