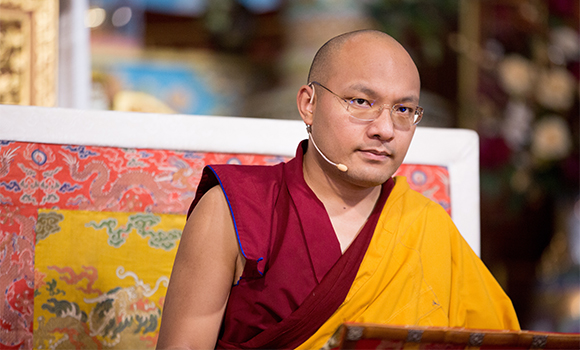 February 26, 2016-Tergar Monastery, Bodh Gaya, India
The four tall tormas with the figures of the sixteen Karmapas have been transferred from the Pavilion to the Tergar shrine hall marking a shift in events from the Kagyu Monlam to the Winter Debates for Monks (Gunchӧ). It is here in the shrine hall that the main discussions and teachings will take place from February 26th to March 10th. The event is well attended this year with eight tulkus, twenty-nine khenpos (professors), nineteen lopons (teachers), ten discipline masters, and 926 students from nine different shedras (monastic colleges).

The opening talk was given by the Gyalwang Karmapa on two topics. The first on the discards and antidotes in the paramitas from the One Hundred Short Instructions by the Eighth Karmapa Mikyo Dorje. The Karmapa then spoke eloquently on the origins of the classification of tenets into four schools and the history of how mainly the Great Exposition School developed and commented on the Sutra School as well.

The focus of the discussions this year is Chapters Three to Ten of Gampopa’s Ornament of Precious Liberation. The first three days featured specially invited teachers, including Khenwang Yangton Tulku from HH the Dalai Lama’s Private Office, Khenwang Gen Wangchuk Dorje from the Central University of Tibetan Studies, and Khenwang Khenchen Trinle Dorje from Darjeeling, who had just published a book called, A Clear Mirror Illuminating the Words and Their Meaning to Cut Through Doubts about the Ornament of Precious Liberation, a Graduated Path for the Mahayana. The topics covered by the six speakers included the Four Dharmas of Gampopa, the status of physical embodiment, death and impermanence, love and compassion, the outline verse for Chapter Six, and aspiring bodhichitta.

Simultaneous with these teachings, during three mornings, Khyabje Sangye Nyenpa Rinpoche gave the reading transmission the Eighth Karmapa Mikyö Dorje’s commentary on the Vinaya, the Mandala of the Sun. Traditional debates on tenets are taking place, and for debates on the Collected Topics, Lorig, and Tarig, the participants have been divided into upper and lower classes. From afar, the monks’ voices can be heard from as they challenge each other in the vast space of the Pavilion. Two Western-style debates take place in the Tergar shrine hall focused on the topics: Can blind faith be considered faith or not? and Are the Dharma and the secular world opposed or not? This new format is designed to train the monks to dialogue with the modern world using its mode of intellectual exchange.

The Winter Debates are thus providing the monks with a special opportunity to refine and deepen their knowledge of traditional Buddhist topics while they are introduced to new ways of presenting Buddhist ideas.