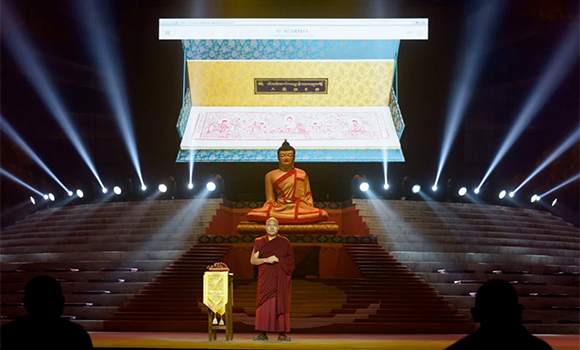 23 February, 2016 -The Monlam Pavilion
In December of 2014, the Gyalwang Karmapa discussed a project by his organization, Dharma Treasure, to digitize a wide range of Tibetan texts beginning with the Jiang Kangyur. He explained that Dharma Treasure is concerned with “Preserving and sustaining with modern technology numerous scriptures and texts, mainly focusing on the Kangyur (the words of the Buddha) and the Tengyur (the commentarial treatises).” He continued, “In the past, scriptures were kept between two boards, wrapped in brocade, and placed in cabinets. Nowadays, when people want to read a particular text, they do not have to go to a library. They can find a text instantly by searching for it on their computers or mobile phones.”

Making texts easily available is vital, the Karmapa stated: “If we do not keep up with the times, in the future it will be difficult for us to spread the Dharma. We must meet the current needs of today’s generations, who are no longer interested in the traditional way of reading scriptures. If we do not provide modern ways of accessing texts, then gradually the people who read, study, and research

These precious Buddhist books will lose interest and their numbers will dwindle.”

The project of digitizing the Jiang Kangyur began over three years ago. Most of the input was done by Nitartha International in Seattle, Washington, and some was also done at Lekshey Ling Shedra in Kathmandu. The texts were checked and rechecked over three years by representatives of the Karma Kagyu shedras (monastic colleges), while the master woodblock prints were scanned without any changes. The extensive and complex software development, and the sizing and cleaning of the texts were all done in Taiwan. Thus the project of making this precious version of the Kangyur available worldwide was also an international effort.

This evening as the first event of the Marmei Monlam, the Karmapa officially released the initial version of Adarsha. He began with reciting the famous four lines:

The unsurpassable teacher is the Buddha.

The unsurpassable protector is the Dharma.

The unsurpassable guide is the Sangha.

May all be auspicious through the Three Jewels?

“I would like to introduce to you,” he continued, “the project we have been working on to digitize the Jiang Kangyur. This endeavor has been given the name Adarsha, which means “mirror” in English. The reason for the name is that in the future, we would like it to become a program that allows everyone to view and read not just the words of the Buddha, but also of the great Indian scholars of the past and all of the scriptures in Tibetan. [On the large screens on either side of the stage, appeared “Adarsha Reflecting Ancient Texts in New Ways.”]

“Adarsha’s home page opens to [a brocade-covered box holding the Karmapa’s edition of the Jiang Kangyur is opened to show] images of the Buddha Shakyamuni in the middle, flanked on the left by the 9th Karmapa, Wangchuk Dorje, and on the right, by the 6th Shamar, Chokyi Wangchuk. If you click on the dark line above the image, three different sections will appear: the Kangyur, the Tengyur, and texts by Tibetan scholars. For the Kangyur tab, all the sections have been input; the Tengyur has just one for now; and the works by Tibetan scholars has just one, but in the future, we hope to include them all. When you click on the Kangyur tab, what comes up on one side is a list of the different sections and on the other side appears the content. On each page of the Kangyur, a number appears and clicking on that will bring up the original scan.

“There is a regular search engine for the site and also an advanced one, which you can use to search, for example, all the texts that were taught in one place, such as Vulture Peak in Rajgir. It is also possible to search in an easy way more detailed information about a text, such as which turning of the wheel of Dharma it belongs to, the name of the translator, the name of the editor, and other characteristics.

“All of this is available on the website, and for those who do not have Internet access, the program is also available on a USB. [The Karmapa took out a USB from maroon pouch.] Not only will you be able to search the Kangyur on your computer, but also on portable devices, such as iPhones and iPads. The app is now available through the Apple Store. After it is downloaded, the screen looks like this [opening screen displayed]. The internal structure is the same as the website so you can read the entire Kangyur. For example, if you wanted to look at the sutra section, you could browse each of the different volumes, which are labeled with the letters of the Tibetan alphabet, ka, kha, ga, nga, and so forth. The app also has the regular and advance search engines.” The Karmapa then showed the address for the website:http://adarsha.dharma-treasure.org/adarsha2016/hp.html

In closing he made the aspiration: “Digitizing the Kangyur and putting it on the Internet is a way of bringing the Buddha’s teachings into the 21st century, so that these precious texts will not just sit on our shrines, but will be read, studied, and researched, allowing our intelligence, faith, and devotion to develop.”