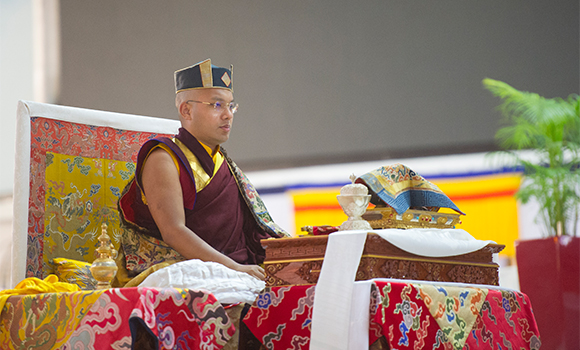 4 February, 2016 -Monlam Pavillion, Bodhgaya
The Tibetan Year of the Wood Sheep is drawing to a close. In the Tibetan Buddhist tradition, an extensive protector ritual–the Gutor Chenmo– is usually offered in the final week of the Tibetan year in order to clear away all obstacles before the new year begins. This year’s Gutor Chenmo is being offered to the Four-Armed form of the Dharma Protector Mahakala.

Over the last few weeks, many people have worked intensively to finish the Monlam Pavillion in time for the beginning of the Gutor. The floor has been repolished and cleaned. Door and window mantels have been painted in traditional Tibetan style, and a great backdrop of the rising sun has been painted on the new back wall of the pavilion. Pleated drapes have been hung from the ceiling, and the central aisle has been carpeted in red. Twenty-four new thangkas depicting the yidam deities of anuttarayoga tantra have been hung to either side of the central aisle. These rare thangkas come from a series of paintings by the Eighth Kenting Tai Situpa, Choekyi Jugne (1700-1744). Twenty-seven of the original twenty-eight thangkas survive and are stored in a museum in China; the thangkas in the Monlam Pavillion were specially commissioned by His Holiness the Karmapa for this year’s Gutor and Losar celebrations and are enlarged facsimiles printed to very high quality on canvas in Taiwan.

The last preparation, completed on the morning of the puja itself, was the ceremony of ‘opening the eyes of the Buddha’. The Gyalwang Karmapa mounted the scaffolding around the new eighteen-foot high Buddha statue and carefully painted in the eyes before consecrating the image.

In the afternoon at 3.00pm, His Holiness arrived in full ceremonial dress, wearing his black activity hat, the distinctive headwear of the Karmapa lineage, traditional brocade and white felt boots, a golden brocade waistcoat, and a chabluk (the square-shaped brocade container which hangs from the waist). Finally, before taking his seat on the throne, he donned a heavy golden brocade dhagam or cloak.

The Gyalwang Karmapa’s simple throne faced inwards, towards the booth of dark blue cloth which contains the special large Mahakala torma known as the dhö or tor-gya (pronounced ‘torja’), which would be burnt on the final day of the ritual. Usually this booth is kept closed, but the Vajra Master pulls aside the entrance curtains each day before the puja begins. A thangka of Four Armed Mahakala hung from a pillar behind the booth.

At a right-angle to the Gyalwang Karmapa’s throne stood the tiered offerings table, covered in a cloth of indigo edged with silver. A large Four-Armed Mahakala torma offering rose high above the upper tier. The lower tier held the eight traditional offerings argham, padyam, pushpe, dhupe, alokhe, gendhe, newidye, and shabdha, (pure drinking water, water for bathing, flowers, incense, light, food, scented water and music). However, because Mahakala is a wrathful deity the flowers, food and music had been replaced by special torma.

In a protector ritual such as this one, it is usual to visualise one’s self as one of the meditational deities (Tib. yidam). As both are considered to share the same essential nature, the yidam deity associated with Four-Armed Mahakala is Chakrasamvara. Thus, the focus in today’s preparatory practice was on Chakrasamvara and it began with a Chakrasamvara self-visualisation. The one used this afternoon can be traced back to 11th century India when Marpa the Translator visited Bodhgaya and received the transmission for this practice from the head lama at the Mahabodhi Stupa. Marpa brought the practice back to Tibet, where he passed it on to his main disciple, Jetsun Milarepa. It was the first empowerment which Marpa gave to Milarepa and so at that point Chakrasamvara became Milarepa’s main meditational deity. Milarepa transmitted the practice to his disciple, Gampopa. In turn, Gampopa passed it on to his disciple Dusum Khyenpa, the first Karmapa, and thus it entered the tradition of the Karma Kagyu and the lineage of the Karmapas. This particular form of the practice was composed by the Eighth Karmapa, Mikyö Dorje (1507–1554).

The afternoon also included a Short Practice to Four-Armed Mahakala and concluded with a ganachakra feast offering to Chakrasamvara. As is the custom, the first tea offering and offering to the nuns and monks during the ritual was made by His Holiness the Karmapa and his administration.