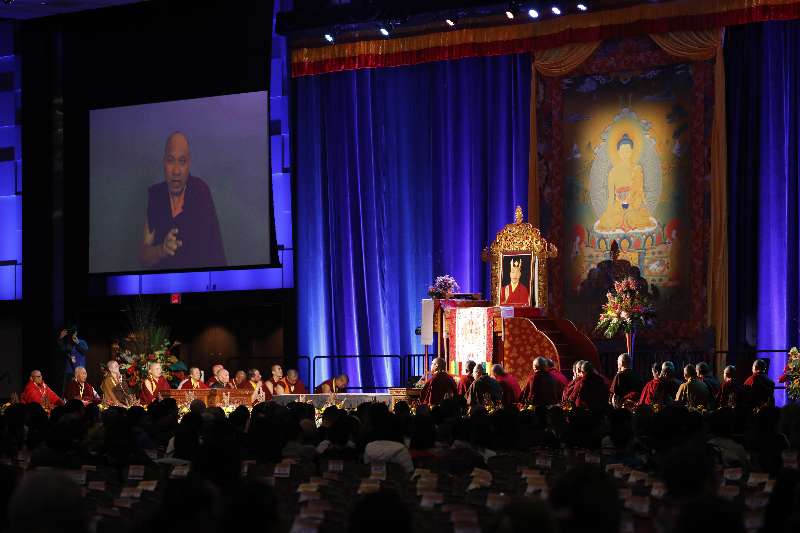 Resplendent in brocade chubas and multi-colored aprons, the Toronto Tibetan community, the largest in North America, filled the auditorium for the fourth and final session of the two-day video teachings.

Because he could not attend in person, it was no longer viable for the Karmapa to bestow the Chenrezik empowerment, so he gave the meditation transmission of the Chenrezik sadhana. A mandala offering to request the transmission was followed by recitation of the refuge prayer and bodhicitta. Then, based on the instructions given in the first three sessions, the audience was asked to maintain the visualizations while His Holiness read through the sadhana and led the chanting of the six-syllable mantra, Om Mani Padme Hum.

Elaborating on the historical background, His Holiness explained that, because of the close relationship between Chenrezik and Tibetans, not only the Karmapas but also many high lamas, including His Holiness the Dalai Lama, are regarded as emanations of Noble Chenrezik and instruments of his boundless activities for the benefit of living beings. There is, however, a strong connection with the lineage of the Karmapas. The Tibetan tradition of prayer wheels began during the time of the second Karmapa, Karma Pakshi, who, after a vision of dakinis singing it, introduced the practice of reciting the six-syllable mantra to a melody. He spread this tradition of singing the mantra throughout Tibet. Further, during the Black Crown ceremony, when the Karmapa dons the crown, it is the custom to chant the six-syllable mantra to a melody.

In conclusion, His Holiness expressed his hope that through the transmission of the six-syllable mantra, “because of this strong dharma connection of ours, we and all others may grow the seed of liberation and omniscience in our beings…. May we all become diligent about the meditation practice of Noble Chenrezik in order to bring all sentient beings, who are stricken by suffering, swiftly to the unexcelled state of buddhahood.”

The Karmapa then spent some time speaking very openly about his current situation.

It is now eighteen years since he had arrived in India, but for the last eighteen months, he has been staying abroad, mainly in the USA. It has been a very difficult time, partly because of health issues, but also because of problems that arose and the consequent stress he was under. “I think that this time I spent in America was the hardest period of my life,” he stated.
He explained that, although the Indian Government issues Tibetans a travel document so that they can travel to other countries, it does not have the status of a passport, and the use of this document to travel abroad has become increasingly problematic, especially since some countries refuse to recognize its validity. Consequently, many high lamas of various Tibetan traditions have sought foreign citizenship in order to be able to travel freely and accomplish their dharma activities.
Under advisement, the Karmapa acquired citizenship of the Commonwealth of Dominica (not the Dominican Republic as reported mistakenly in the press) and received a passport. This will enable him to travel freely all over the world in order to accomplish his dharma activities.

The Karmapa also spoke about his recent meetings with His Holiness Thaye Dorje on October 10 and 11 in France. He commented that many people have misconstrued what happened. The main aim of their meeting, he clarified, was for them to get to know each other on a personal basis and come to a personal understanding. Prior to the meeting, he had known very little about His Holiness Thaye Dorje, so this was just a beginning. No decisions were made, and there was still a long way to go. What happens in the future depends upon the entire Karma Kagyu community. His Holiness emphasized that everyone needs to take a long-term view, extending not just a few months or years but a few decades or generations.

“The Karma Kagyu lineage has split into two, and that split should not continue from generation to generation,” he stated. In fact, the Karmapa explained, His Holiness the Dalai Lama had advised him to meet with His Holiness Thaye Dorje. It would be very dangerous for the lineage and its teachings, the Karmapa asserted, if the Karma Kagyu were to be factionalized and partisan. Some people had interpreted the meeting as a defeat or loss of face for him, he noted, but to characterize it as victory or defeat was a mistaken short-term view. In the context of the long-term danger that there would be nothing left of the Karma Kagyu, losing face and the question of victory or defeat were not that important. With this clarification and the request to keep his words in mind, His Holiness’ first video presentation of the afternoon came to an end.