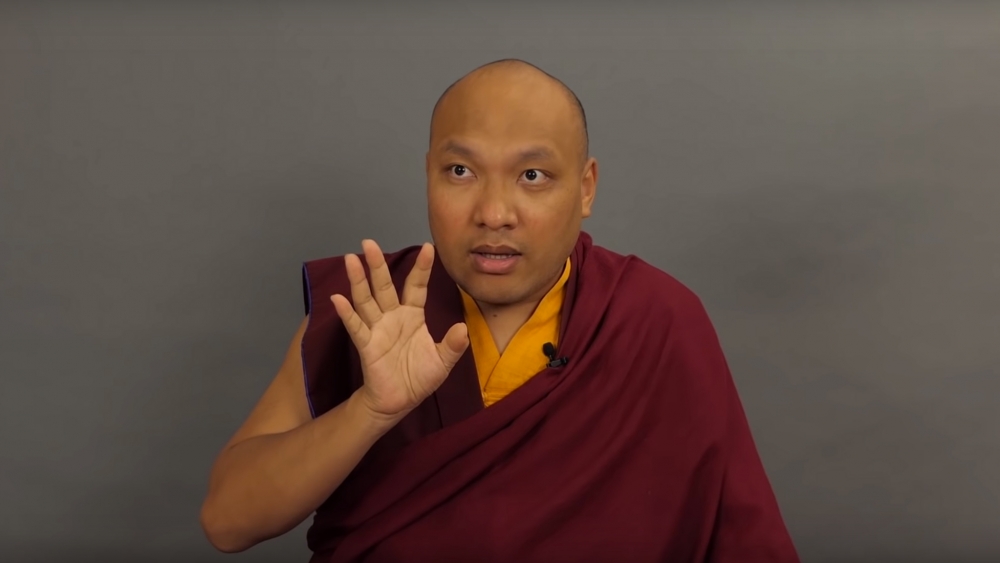 On the second day of the Toronto video teachings, the audience was able to submit questions to His Holiness. After the meditation transmission for the practice of Chenrezik, His Holiness replied to as many of these queries as time permitted.

The first question asked how Dharma practitioners should respond when faced with the misbehavior of a religious teacher. How do they not lose faith in the Dharma? His Holiness gave a detailed reply:

The #MeToo movement is about the difficulties our society faces in general, and about those that women face in particular, and the problems are not easy to speak about. Since this is a societal problem, the #MeToo movement has become powerful. Along with it, many situations involving religious figures, including some Buddhists, have come to light. The primary question for followers is this: when religious leaders are involved in such problems, how should we think about them? How do we not lose faith?
In Buddhism, it is often stated that we should make a clear distinction between the teachings and an individual, and I think this is a critical point. There are the teachings and there are individuals, who can be of many different types. To speak honestly, just because someone has a title, such as ‘lama’ or ‘rinpoche,’ people can be captivated; simply due to an impressive name, an individual can appear quite special. But it is very difficult for a person to actually live up to that high title.
When we are separating the Dharma from individuals, it is important to understand that while there is a wide range of individuals who behave in a variety of ways, the Dharma itself is authentic. Someone may have the label of a Dharma practitioner, but they are subject to numerous conditions, such as their previous karma or perhaps an incorrect way of practicing the Dharma. Individuals can have faults and make mistakes; however, the genuine Dharma is something in which we can place our trust.
When it comes to our Dharma practice, we are not doing it for someone else. It is very personal; we are the ones doing our practice in order to transform ourselves. If things do not go well with a teacher, that is not the reason to give up on the Dharma as a whole. The situation resembles turning to a doctor when we are sick. There are good and bad doctors, and if we happen to chose a bad one, we do not give up on all doctors and stop seeking medical treatment. In this way, I think it is important to consider the situations brought to light by the #MeToo movement.”

Several of the questions focused on practice. One asked about how a practitioner could combine practices, such as Vajrayana and Confucianism. In response, His Holiness emphasized that the most important factor in order to practice properly, irrespective of which practice, is to have a qualified person to guide us who teaches us the complete practice from the beginning to the middle and through to the end. In Buddhism it is said in particular that a teacher should recognize that there are three basic types of individuals with low, average, or superior capacities. They should know the different paths for each capacity and understand the stages of the path to enlightenment. If this is the case, then whether you are practicing Amitabha or another meditation, they all come down to the same place.

Several questions asked about difficulties that can arise. What should we do when we are unwell and unable to practice? His Holiness replied, “Some people think that it is best to pray to the buddhas and bodhisattvas to remove an illness, but actually it is not certain that being well is better than being sick. If we are really practicing, we practice whether we are sick or not. That is true practice.

“We practice to face directly birth, old age, sickness, and death and to come to recognize their true nature. When he was a prince, the Buddha was enveloped in the luxury of the palace. Then he met these four stages of life and practiced to realize their essential nature by leaving the palace, engaging in austerities, and finally becoming fully awakened.”

A further question concerned how to practice the view of emptiness during the visualization of a deity or a mantra practice. His Holiness explained, “In the Secret Mantrayana, when we are practicing visualization or mantra, it is important that the practice reverses our attachment to ordinary appearances. Whatever arises is mere appearance, emptiness and appearance inseparable, but due to our clinging to these appearances as real, the moment they arise, we immediately grasp them as truly existent and so impair our ability to see their reality. Things are not the way we think they are; we fixate on ordinary appearances and miss their actual nature because we do not comprehend emptiness.”

He continued, “Visualizing a deity or reciting a mantra stand in direct contradiction to our usual way of perceiving.” Before we do these practices, we must first reflect on the actual nature of things, on emptiness or the dharmata, and from within this true nature, arise the appearances of the deity, the support for our Dharma practice. With these, we think that we have created a new world, which arises out of emptiness and is inseparable from it.

Another question asked how a practitioner should choose which practices to prioritize. His Holiness made two suggestions: either we should do whatever practice in which we feel the strongest faith or ask a lama to identify what we should be practising.

What if the state of our mind prevents us from practicing, for example, if we are sad or depressed or disappointed? His Holiness emphasised the importance of consistency and diligence, which strengthens our mind. Whatever our state of mind, we need to continue practicing. Otherwise, he warned, our mind will gradually become impaired, increasingly out of control, and then we will not be able to do anything.

The next question asked about the practice of Chenrezik and radiating lights to all beings to eliminate their suffering, which in actuality seems impossible. Why do we do this? The Karmapa replied, “The purpose is to train our minds. Our compassion is developed through the aspiration to eliminate all the suffering of living beings. Even if this does not actually happen, the thought, ‘Wouldn’t it be wonderful if it came true?’ gives us joy. Even if it is difficult to actually acomplish something or if they cannot, bodhisattvas still try to make it happen. Their aspirations are limitless, not restricted by ‘can’ or ‘cannot’; they work on what cannot be accomplished until it can be.”

Over the past year, His Holiness had talked about his health issues, and one questioner asked what people could do to help. His Holiness thanked them for their concern but said he was unsure how they could help. [He later clarified that the recitation of the following would be helpful: Medicine Buddha, Chenrezik, the Twenty-One Praises of Tara, and the Seven-Line Prayer to Guru Rinpoche.]

Regarding the conference in Dharamsala for religious leaders in November, His Holiness reiterated that he hoped to be there, but it would depend on whether the causes and conditions came together or not. [Earlier in the afternoon he had explained that he was waiting for the Government of India to issue a visa.]

Finally, one question raised issues concerning environmental problems, our consumer society, and the role Buddhist Dharma can play in addressing them. His Holiness advised that the crux of the matter is inner contentment. We are bombarded by advertisements, he said, which tell us “You must have this.” They try to persuade us that we cannot live without the product they are selling, but they are deceiving us. We need to ask ourselves, “Do I need this or not?” The most important thing is to have few desires and be content.

The video ended, the screen darkened, and the closing ceremonies began. As is customary, the event concluded with a thanksgiving Mandala Offering, led by Lama Tenzin from KSDL Buddhist Center, which organized the teachings, followed by the sponsors. In his speech, Lama Tenzin thanked all those who had worked so hard to make the teachings a success: first and foremost His Holiness the Gyalwang Karmapa, who had recorded the teachings in spite of being unwell; sangha members and all who had attended, from near and far; the organising team and the volunteers; and the sponsors whose generosity had made it all possible.

As the crowd began to drift away into the Toronto afternoon, many stayed to place khatas on the Karmapa’s throne. Though the Karmapa himself had been unable to attend, it was still possible to feel his presence and gratitude for the teachings they had received.