The Importance of Retreat 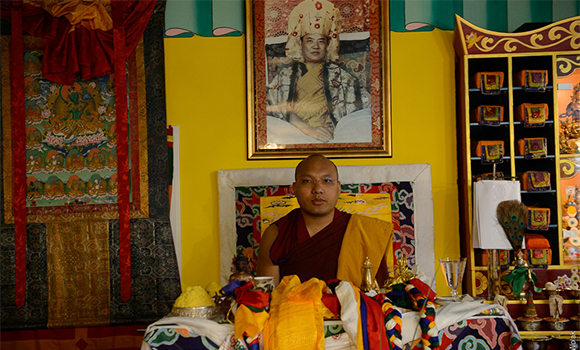 On Wednesday afternoon, the 17th Karmapa made his first visit to Halscheid to bless Karma Tekchen Yi Ong Ling retreat centre. Situated just outside the small village of Halscheid in the Windeck region of Germany, the centre is run by the German Karma Kagyu Gemeinschaft under the spiritual guidance of the Karmapa’s senior tutor, the Venerable Khenchen Thrangu Rinpoche. Although two traditional three-year retreats have been completed at Halscheid, the main focus of the centre’s work these days is to offer a variety of short and long-term retreats, so that laypeople with work and family responsibilities may benefit.

In readiness, the centre had been decorated with newly-hung prayer flags and the eight auspicious symbols had been painted on the gravel path. As His Holiness’ car approached, Lama Kunga Dorje, the Retreat Master, stepped forward to welcome him.

Sixty people, retreatants past and present, sponsors and friends of the centre, had gathered in the shrine room. Sitting on a throne directly below a photograph of his predecessor, the Karmapa himself led the prayers and blessings. After the short ceremony, he presented the centre with a signed thangka of White Tara. Lama Kunga gave a short account of the centre’s work, and then His Holiness responded with a short talk in English.

“Retreat centres are very important for the Kagyu lineage,” he said, “because the Karma Kamtsang especially emphasises practice and meditation…it’s called the practice lineage. We have a long history of solitary retreatants such as Milarepa.” The Karmapa expressed his delight that there was a new retreat centre in Germany, while apologising for his own lack of retreat experience.
“I had a month’s retreat, and I did a White Tara retreat for 6 or 7 months when I was in Tibet, but this can’t be compared with a three year retreat,” he admitted. However, although he lacked formal retreat experience, he considered that being confined to the fourth floor of Tsurphu Monastery when he was in Tibet constituted a different kind of retreat experience. Moving on to the work of Karma Tekchen Yi Ong Ling, His Holiness commended its approach as very suitable for people in the 21st century who live such busy lives and have to balance the responsibilities of work and family.

“Sometimes, it’s not necessary for everybody to complete a 3 year retreat,” he explained. Often, even should the opportunity arise, we may be too busy, or our minds might not be prepared sufficiently. “To do a one week or two week retreat is very good, in order to enjoy our meditation practice,” he suggested, “so that we get a real taste of spiritual practice.” During a short retreat, we can take a break from the dominance of the five senses, and, through meditation practice, we can experience through a sixth sense instead and realise the joy of samadhi. “Also,” he continued, “the experience of retreat builds up our strength and self-confidence in order to face life’s challenges, difficulties and of course death.” In Tibet he had always enjoyed visiting the Tsurphu retreat centre, high up on the mountainside. “As soon as I enter a retreat centre,” he explained, “I feel some peace or blessing.” This special feeling associated with retreat centres gave him confidence that the Kagyu lineage is not about to die out.

Everyone present now had chance to offer a kata to His Holiness and receive his blessing directly.
Afterwards, the Karmapa held a private meeting with those who had completed the traditional three year retreat, before visiting and blessing the wooden hut where the sole, current three year retreatant lives. A final photograph with everyone gathered in front of the centre, and then the visit was over. Everybody lined the road once more and waved their katas enthusiastically as His Holiness drove away, back to Kamalashila. The members smiled at each other. Their centre had been blessed and their work approved by the head of the lineage.