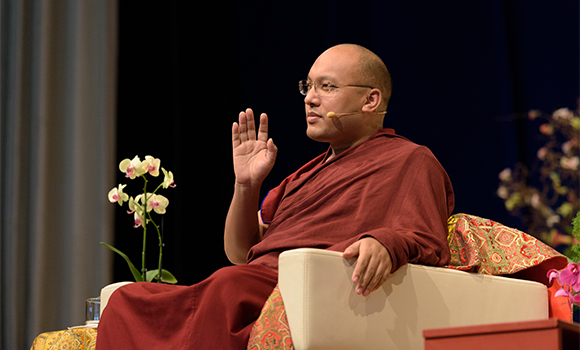 For his final public talk during his trip to Europe, His Holiness the Karmapa opened by expressing his hope that the audience felt satisfied with the time that they had shared together. His comment came at the end of four consecutive days of Dharma teachings, public talks, audiences and empowerments, and he pointed out that this was a longer period of time than they had enjoyed together on his previous visit.

He spent a moment contemplating the title of the talk, and chose the phrase ‘without limit’ to begin his exploration of the nature of satisfaction and happiness, and the mistaken methods we often employ in pursuing them. (Without Limit serves also as the title for his tour.)

“Due to technological developments and rapid material development and ongoing progress, it’s as if there are limitless choices presenting themselves to us, “he began. In spite of this it seems that most people appear not to experience a sense of satisfaction in life. Advertising constantly signals to us that there is something better than what we have, and bombards us with information seeking to convince us not to rest until we have attained it, he said. The result is a persistent sense that who we are and what we have is not sufficient, which has created a habit of feeling dissatisfied.

“Material wealth is a kind of artificial happiness,” he commented. “It cannot give us real or authentic happiness.” Reflecting on the foolhardiness of placing our trust in material objects in hopes of finding happiness, he described material power as a highly unstable form of power, subject to great fluctuation and therefore unreliable. Returning to the theme of ‘without limit’, he contrasted limited natural resources from which we produce goods with our greed, which has no limit. This places us in “an impossible situation”, he said. “A limited world cannot fulfill the unlimited desires of beings.”

His Holiness therefore called for a re-orientation towards developing inner rather than outer wealth. This is the only way to become truly wealthy, he stated, and to feel satisfied with what we have. “There is nothing in the material world for our mind to rest in,” he said.

In the course of his teaching, the Karmapa outlined various ways in which our mistaken views about the nature of happiness prevent us from encountering the happiness we seek. “From a certain perspective, happiness is quite natural and simple,” he said. “Our problem is that we think of it as being complicated.”

As a means of finding inner happiness, the Karmapa offered the audience instruction in breathing meditation. Before he did so, he took pains to disavow any real knowledge of meditation. “I am no meditation master,” he said, conceding that he does “have some feeling of appreciation for inner happiness.”

The Karmapa joked that he does not much care for the question—which he is often asked—as to how many hours he meditates and what daily meditation schedule he follows. He described himself as not following any fixed schedule, but rather meditating when the occasion to do so arises naturally, and generally seeking to sustain mindfulness and awareness throughout the day.

In his presentation, the Karmapa highlighted two qualities of breathing meditation that make it particularly suitable for his European audience. First of all, he explained, since breathing is a natural and effortless activity, we do not need to take steps or do anything special in order for the focal support for our meditation to be present. “For this reason,” His Holiness said, “when we focus on the breath, we are allowing our mind to return to its natural state. When this happen, naturally the mind relaxes.”

The Karmapa observed that most people in Europe lead busy and stressful lives, full of ups and downs and unpleasant surprises. When we are under pressure and feel tense, not only does our mind become disturbed, but our breath does too. For this reason, regularizing the breath also helps to settle the mind, he said, and identified this as a second special quality of breathing meditation.

Linking his instructions to the theme of finding satisfaction and happiness, His Holiness noted that breathing meditation provides a very simple method by which we can “discover the experience of satisfaction”.

Simply focusing on our own inhalation and exhalation can yield a direct awareness of how amazing it is to just be alive, he said. He pointed out that were we required to purchase all the conditions needed for breathing, we would be unable to do so. Nevertheless, with no effort on our part, all that we need to breathe is available to us effortlessly, not only for a single breath but continually throughout our lives.

“Through this simple technique of breathing meditation,” he said, “we can gain the insight that we are amazing, wondrous beings.”

Before bringing the evening to a close, the Karmapa gave practical instructions for those interested in engaging in the meditation practice he had described. He explained that one’s physical posture should be relaxed so that the mind can settle naturally, and that one should breathe naturally and steadily. “We are not practicing Chi Gung!” he joked. “There is no need to take vigorous breaths or to hold the breath at any point. Just breathe as you would ordinarily.”

Noting that some masters recommend counting the breath, he expressed his view that it is also fine not to do that. “As you exhale, just pay attention to the breath,” he said. “If past problems, present problems or future problems come to mind, do not follow the thoughts. Let them go.”

His Holiness particularly recommended that meditating 15 to 20 minutes a day would be beneficial for those living in the West.

In closing, the Karmapa expressed his wish to be able to continue coming to Europe in the future, and not just to Germany which he is now visiting for the second time, but other countries. He acknowledged how much effort was required to bring about his visit, and offered his heartfelt thanks to all those who had supported his visit and worked hard to make it a success.

As he described his plans for the upcoming year, His Holiness emphasized the annual Kagyu Monlam prayer gathering in Bodhgaya, plans for a special event to commemorate the 16th Karmapa and the Arya Kshema Winter Nuns’ Gathering. The Karmapa spoke of his plan to begin the process leading to full ordination to women in the upcoming year, eliciting a burst of applause. He then expressed his aspiration to return to Europe in May, June or July of the upcoming year, and the applause continued.

Before closing, he offered words of encouragement to Dharma centers in Europe. He acknowledged that the heads of the Dharma centers have faced special challenges because many Karma Kagyu lamas have been unable to travel with any frequency to Europe. “However,” the Karmapa said, “since your faith and samaya are unchanging and your spirit is resolute and steadfast, you have kept heart, and I hope you will remain undiscouraged by these circumstances.”