The Heart is Noble 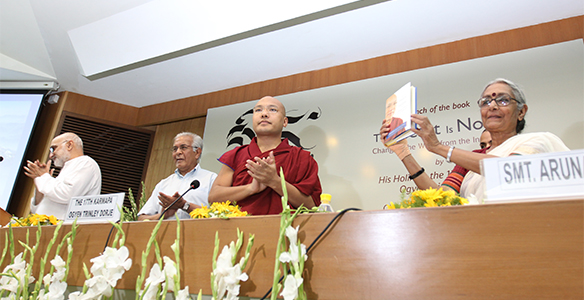 His Holiness the Karmapa’s new book was the talk of the town in Delhi, India this week, where it was officially released by the eminent social activist Aruna Roy. Entitled The Heart Is Noble: Changing the World from the Inside out, the book explores the most pressing issues of our day, including the environmental crisis, food justice and gender issues, arguing that each and every citizen of the world has a role to play in creating a better future for us all. The book launch was standing-room-only at the India Habitat Centre, where such highly distinguished figures as Rajiv Mehrotra, Pavan K. Varma and Vandana Shiva also spoke in support of His Holiness the Karmapa’s approach to society as outlined in his new book.

Speaking as chief guest at the book-launch event, Aruna Roy said, “As a social activist I was very excited to find that a person who is religious and who heads a religious institution should echo the words and feelings of people like me.” Aruna Roy has dedicated her life to working to eradicate poverty, and is one of India most respected voices speaking on behalf of the underprivileged.

Aruna-Ji went on to quote a passage on hunger and food justice from The Heart Is Noble, and commented, “If this message could percolate through to the people who govern this country, then India would certainly be a different place for the poor very soon.”

While Aruna Roy officially released the book as chief guest, Wajahat Habibullah (Chairperson of the National Commission on Minorities) was also present for the event, and was invited to the dais to assist in unveiling the book itself.

Next to speak was the Gyalwang Karmapa, who described his aims in the book: “In my new book, I take a look at various issues relating to our society. I hope that I can offer some insight and inspiration as to how we can relate to these social issues, and to issues that are relevant in our world at large. I also hope that I might offer some support and suggestions as to how we can all extend and expand our ability to bring benefit to as many living beings as possible.”

His Holiness the Karmapa then discussed the major themes of his book. He pointed to the ethical implications of interdependence, which he says include a shared responsibility to work for social justice and environmental protection, based on all that we receive from society and the planet.

“This principle of interdependence has direct relevance to our lives as consumers,” he said. “We make choices that would appear to be individual ones, yet carry implications that extend throughout society at much broader levels.”

The optimistic—though challenging message of the book—is that every single individual is responsible of changing the world for the better, and that even our small actions count and come together to make vast changes. At the same time, His Holiness reminds us that we already have within us sustainable inner resources for engaging in this work joyfully: our own noble aspirations and our capacity for compassion.

During his address, the Gyalwang Karmapa said:

“A wholesome sense of responsibility is one that is sincerely motivated by a voluntary sense of enthusiasm and joy to do what is good and meaningful—to develop our capacity to live in a way that is genuinely meaningful and beneficial to others around us.”

Rajiv Mehrotra, the respected Trustee and Secretary of His Holiness the Dalai Lama’s Foundation for Universal Responsibility and documentary film-maker widely known as host of the longest-running talk show on Indian public television, said, “The Heart Is Noble is a wonderful articulation of His Holiness the Karmapa’s ideas. While he is twenty-seven years old in this incarnation, he represents the accumulated wisdom of 900 years. There are so many elements in the book that are diverse and although they draw upon Buddhist philosophy, they are tailored to respond to contemporary issues, ideas and predicaments that make them enormously accessible.”

Vandana Shiva, a scientist and eco-feminist whose Navdanya organization is studied internationally as a model for environmental activism, read and commented on several excerpts from the book, including the Gyalwang Karmapa’s description of his own feelings for the earth – as not a dead rock but as something alive, breathing and constantly giving, whose beauty elicits a sense of wonder and appreciation. Vandana Shiva commented, “My life has been inspired by exactly those feelings of beauty which then translate into the search for truth, into science, into research.”

She also spoke movingly of His Holiness’s stance on women’s issues, on the environment and on consumerism and greed. Turning to the Gyalwang Karmapa, she said, “As you’ve said, gender seems to define our place in the world, but it’s just a construct. It’s just an idea. And you have deconstructed it so well and so beautifully. Gandhi too, every day in his prayers said, ‘Make me more womanly.’” Moving beyond the issues of gender identity to address His Holiness’s treatment of the damage of seizing onto fabricated identities as real in his chapter on relationships, she added, “Just as there is interdependence in the world, these fluid identities are part of what we need so much because it’s not just fixed but fragmented identities that are behind so much of the violence within our own societies.”

After reading a passage from the book’s chapter on consumerism, Vandana Shiva added, “It would really be useful for the Indian youth who are so charmed by consumerism, and so high on it just now, to be able to benefit from your teachings.” She ended her impassioned speech by saying, “Thank you, Your Holiness, for this beautiful gift. We needed something that connected the deepest values and stirrings within each of us to the challenges we face in India, and around the world.”

Next in the illustrious panel of discussants was Pavan K. Varma, a distinguished diplomat and widely published author, renowned for his penetrating analysis of Indian identity and culture. He is currently cultural adviser to the Chief Minister of Bihar, Nitish Kumar. Varma-Ji’s comments were focused on the book’s success in leading readers from vague spirituality to feelings of compassion and from there to awareness and actual action.

“Spiritually must nurture compassion and compassion must awaken awareness, the ability to see around you with that compassionate eye,” he said. “Then it must lead to action. An action naturally needs direction. So it’s a linear progression – spirituality, compassion, awareness, action. And action must be in the right direction, for the right priorities, for the areas that affect people and that matter the most… so that direction needs to come, and, again, your book is a pointer.”

Concluding his address, he added, “Your Holiness, I’m sure your book will inspire people… and I hope they take away from it this message: that all of us have a role to play in the creation of a better world.”

Also on hand was Caroline Newbury, vice president at Random House India, representing Shambhala Publications, the publisher of the book. “The Heart Is Noble which sets out a vision for a global community based on compassion,” she said. “It’s remarkably enlightening, it’s thought-provoking, but also an incredibly practical book that draws on the idea of interdependence to present a vision of how we all can bring social action into our lives and through very practical, very simple ways that can be incorporated into our everyday choices, change the world around us… Shambhala is incredibly honored to be publishing His Holiness’s book.”

Rajiv Mehrotra himself had the final word, closing the event by saying, “The Karmapa concludes the book with the following passage, and that’s probably the most appropriate way to conclude the evening:

I mentioned before that we can make others the keepers of what is precious for us, when I spoke of wanting to let the moon keep my love. Since the moon is holding the love I have for you, seeing the moon can remind you of that, and inspire you. If anything I have said here makes sense to you, you can ask the moon to keep it for you. You can ask the stars to keep it for you. When you look at the moon and the stars, I hope you will be reminded of the thoughts and the love that I have shared with you here.

“Your Holiness, I can assure you that these thoughts and feelings and the power of who you are and the compassion that you manifest has been a transforming time and experience for us, and we’re deeply grateful.”