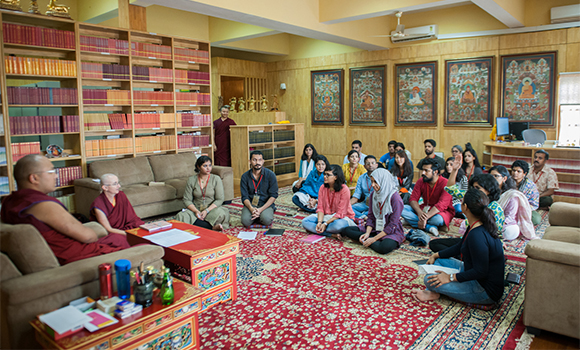 29 September, 2016 – Dharamsala, India
A group of 20 postgraduate students from the psychology department of Ambedkar University Delhi converged in Dharamsala this week for a series of interactions with His Holiness the Karmapa. Their discussions will explore the ways that Buddhism and modern psychology understand and address various human emotions. The emotions to be discussed over the course of the next 11 days were proposed by the psychology students and include: jealousy and envy; love and attachment; greed, desire and contentment; guilt and shame; stress and anxiety; fear, terror and courage; and, faith and hope.

Over the course of their stay in Dharamsala, the group will spend their days immersed in developing presentations for the Karmapa, meeting with His Holiness in his library at Gyuto Monastery, and then reviewing together what they have learned.

The meetings with His Holiness consist of question-and-answer sessions, as well as presentations delivered by teams of three students on modern psychology’s understanding of the various emotions. The presenters are tasked with outlining the ways that each emotion is defined and treated in the various schools of modern psychology. They hold the additional brief of sharing with His Holiness how those emotions look on the ground in their own communities. This acknowledges how emotions, although they form part of a universal human experience, are expressed, valued and experienced in ways that are very much shaped by the individual’s particular gender, religious, caste or class, and cultural contexts.

“This is the first time that I have had the opportunity to hold such a long series of meetings with an Indian student group,” the Karmapa told them during their initial session with him. “For me this is a wonderful occasion, because I can enter into a world that I cannot usually experience, and explore social issues and contexts I am not so familiar with. So for me this is a great opportunity, and I want to express how happy I am to have this time together with you.”

Accompanied by two faculty members from the University, the students are bringing to the conversations a wide mix of personal experiences and social and religious backgrounds. Some had previously pursued careers in law and engineering, while others have already begun working as therapists. Among them are students with Hindu, Muslim, Sikh, Jain and Buddhist backgrounds, and they claim their roots all across India, coming from south, north, northeast and central India.

The programme has been organized and sponsored by Kun Kyong Charitable Trust at the Gyalwang Karmapa’s request. The trust had previously arranged a similar programme to allow Tibetan youth from across India to explore topics of vital interest to their lives, including identity, leadership, and gender issues. Over the past five years, the Karmapa has sought out opportunities for sustained interactions with university students and young professionals from various countries and communities.

The first such sustained interaction with youth was held in 2011 when the Gyalwang Karmapa was 26 years of age, as a credit course for students from the University of Redlands in California, and led to the book The Heart Is Noble: Changing the World from the Inside Out. A subsequent book, Interconnected: Living Fully in a Global Society, is forthcoming from Wisdom Publications in 2017. A major publisher in Delhi has already arranged to publish a book based on the teachings on emotion being held presently with the students from Ambedkar University.

At his present age of 31, the Karmapa maintains a profound commitment to connecting with youth of his generation to encourage them to take greater responsibility for resolving those issues, and to explore with them wise ways to address major issues facing the 21st-century society. The programme with the Ambedkar University students is held in that spirit, and reflects his conviction that Buddhist teachings can serve as resources for non-Buddhist audiences looking for new ways to address matters of universal concern.