The Gyalwang Karmapa Returns to the Central University of Tibetan Studies 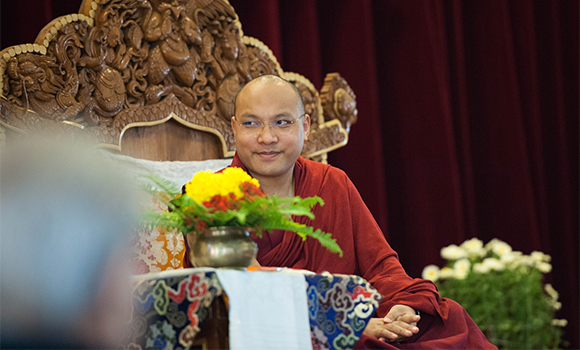 February 27, 2015-Sarnath, India
The main hall at the university has been set up with a richly carved throne placed before a curtained stage, its front edge lined with colorful flowering plants. Above were hung a lovely thangka of the Buddha, flanked by a painting of Asanga and another of Nagarjuna, representing the two main lineages of philosophy that are studied by the Buddhist schools in Tibet.

In the late morning, as people stood on either side of the aisle, holding their white and yellow katas, the Gyalwang Karmapa walked down the center and took his seat to receive katas from a long line of professors, teachers, and staff. In a departure from custom, the Karmapa himself accepted the scarves, leaning over the front of the throne to make a close connection with each person. This sense of warmth and intimacy, as if talking to family members, set the tone for the Karmapa’s talk that followed.

After a welcome speech by the Director of the University, Lobsang Norbu Shastri, the Karmapa began his talk by reminding the audience how famous the university had become. The older generation has worked very hard, and now the hope is placed on the future generations, who have a wonderful opportunity: they are in the land of the Buddha’s birth at the pilgrimage site where he first taught the Dharma and they have everything they need to study. The Karmapa hoped they would use all of this to establish Tibetan Buddhism on a deeper foundation as they can now research the source of Tibetan culture and learning. Further, these studies should also be put into practice so that people engage in meditation, too.

The Karmapa emphasized the importance of everyone, those inside and outside the university, putting forth their best efforts in working together. Tibetans should help each other to find ways to develop and then rejoice in others’ success. There are numerous areas to explore. Texts are available in the Chinese cannon which are not translated into Tibetan; for example, three chapters remain of Vasubhandu’s commentary on The Supreme Continuum in which he explains that the Mind Only view is the definitive meaning of the Third Turning of the Wheel of the Dharma. It would be interesting for Jonang scholars to investigate this. Loppön Chögyal’s commentary on Aryadeva’s Four Hundred Verses, from a Mind Only perspective, is not available in Tibetan but seems to be available in Chinese. There is an amazing amount of research and analysis to be done.

Close to the Karmapa’s heart is a recent project, known as Adarsha [Insert reference to article: Sunday, December 14, 2014,The Gyalwang Karmapa Introduces Adarsha, a New Software Program along with an Electronic Version of the Jang Kangyur.] to digitize the Kangyur and Tengyur as well as texts about other areas of knowledge and in other Buddhist languages, such as Sanskrit and Chinese. The Karmapa mentioned how difficult it is to redact the Tibetan texts, and that in the future, he would be asking people at the university to assist him. He added that we should not think that we have a lot of time. Usually Indians think in very long periods of time, but that should not be the case here.

The Karmapa ended his talk with the wish that everyone enjoy an excellent New Year and remain in good health; that their work be successful, and with the blessing of the Buddha and the bodhisattvas, that virtuous activity be free of all obstacles.