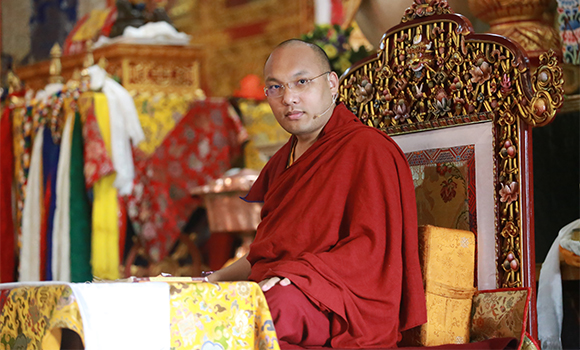 As dawn broke in Sarnath on 27 February, the skies opened and an auspicious light rain began to shower, several peals of thunder ruffling the early morning stillness. By 9am the skies had cleared and the sun shone brightly down on the crowd gathered in the lush gardens of the Vajra Vidya Institute, eagerly waiting to enter the shrine hall.

Although he had not planned to teach in Sarnath, the previous evening the Gyalwang Karmapa had spontaneously announced he would give a talk the following morning. This came as a surprise gift for the large, international group gathered at Vajra Vidya Institute for the annual two-week teaching seminar with Khenchen Thrangu Rinpoche, many of the Gyalwang Karmapa’s own students and devotees among them.

The Karmapa began by joking with the gathering that since he had spoken so much and given so many teachings already this year, he felt he hadn’t much left to say. Nonetheless, Khenchen Thrangu Rinpoche and the Vajra Vidya khenpos had requested him to teach, so he was happy the opportunity had arisen.

He first spoke on the importance of keeping our Dharma practice and motivation pure and not using the Dharma for worldly benefits.

“For example, often we do our Dharma practice in order to become more prosperous, more popular, or have a better life. We use the Dharma for this, but it’s difficult because the greater our prosperity the more we’re deceived by it. The goodness of our lives deceives us. It distracts us. It makes it difficult for us to turn our minds to the Dharma.

“If a person was able to enjoy the good things and pleasant objects of the senses in this life and exercise control over them, then this would not necessarily be harmful for our practice—we’d be able to increase prosperity and still practice the Dharma. But for most of us, the more prosperous we get in this life the more we are deceived, and the more harmful this is for us.”

The Karmapa emphasized the importance of working to train our own minds, which is the entire essence of practicing the Dharma.

Next the Karmapa told the gathering that this year the Four-Session Guru Yoga had become quite popular, and he’d received repeated requests for the oral transmission. Describing the guru yoga text by the eighth Karmapa Mikyo Dorje as one of the most sacred, with the strongest blessings, he said it was very important for individuals who uphold the tradition to practice the Four-Session Guru Yoga. Because it was popular, he felt it would also be beneficial to give the oral transmission once more, which to the delight of those gathered he then proceeded to offer again.

In response to yet more requests, the Gyalwang Karmapa then offered the oral transmission of the long ngöndro text on the four special preliminaries, called the Chariot that Traverses the Noble Path.

“All the different versions of this text are really the same,” he clarified, “but there are a few slight differences in the end during the guru yoga practice – in length, and in the supplication to the lineage. In actuality there’s no difference, just slight variations in the words.”

The Karmapa finished by reflecting how deeply happy he was that he’d been able to make an extensive long life offering to Khenchen Thrangu Rinpoche the previous day.

“There is Vajra Vidya Institute and all other monasteries and Dharma centres under the direction of Khenchen Thrangu Rinpoche,” the Karmapa said, “and if they’re all able to gather their energies together and dedicate them for the benefit of the teachings, I think this will be very beneficial.

“The first Karmapa, Dusum Khyenpa, said we should think of practice as being the best of all offerings, but this is not definitely so. There are occasions when making material offerings is best, or offering service to the guru is best, or when offering practice is best. If we all contribute and do primarily what the lama asks us to do, I believe we will be able to accomplish things very beneficial for beings and the teachings. We’ve made a good interdependent connection for this to happen.”