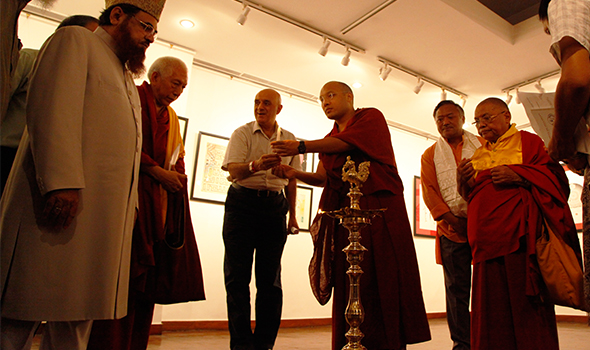 His Holiness the Gyawang Karmapa and Mr. Parvez Dewan, Secretary of the Ministry of Tourism, Government of India inaugurated an exhibition of Tibetan and Islamic Calligraphy to highlight creativity as the highest form of spirituality at the India International Centre, New Delhi.

An exhibition of Buddhist Bhoti and Islamic Calligraphy is being organised by the International Buddhist Confederation – IBC – in collaboration with the India International Centre in a bid to promote inter-faith understanding as its core agenda. They are also making an attempt to highlight the universal nature of basic goodness of all religions, interdependence and responsibilities.

The show, ‘Divinity in Syllables’, has brought together two calligraphers Jamyang Dorjee from Sikkim and Anis Siddiqui who have displayed their works.