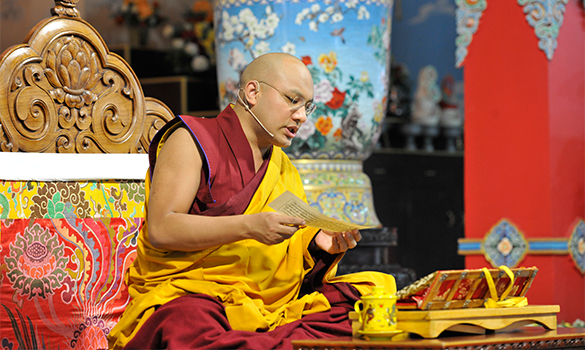 28 November, 2014, Tergar Monastery, Bodhgaya.
The Gyalwang Karmapa entered the shrine room of Tergar Monastery, preceded by incense bearers and monks playing gyalins. Hundreds of monks from Karma Kagyu shedras were waiting with great anticipation for the first session of his teachings during this the 18th Gunchö. Joining them were many international lay students who sat to the back and sides of the hall.

Once the Karmapa was seated, the Venerable Choje Lama Phuntsok, founder of the Gunchö in 1997, made the mandala offering to request the teachings. This year’s winter debate session has been organised by his shedra, Karma Lekshey Ling, in Nepal. A few minutes later, the Gyalwang Karmapa, in his opening remarks, thanked Lama Phuntsok warmly for his hard work and commended his devotion to the teachings.

The Karmapa also mentioned the inter-shedra debate competition judges, who represent four different traditions of Tibetan Buddhism. Inviting them was a symbol of the respect and importance he and the Karma Kagyu hold for all lineages, he said. Any seeming differences between the lineages and traditions in Tibetan Buddhism, such as in terminology, were minor. Because all lineages and traditions accept the Buddha and the Dharma as sources of refuge, in actuality, there is no difference. All qualify as Buddhist teachings. Harmony between them was crucial as the only basis on which the teachings could flourish.

For the third year in succession, the Gyalwang Karmapa continued his oral transmission and commentary on the Eighth Karmapa Mikyo Dorje’s text: One Hundred Short Instructions; a somewhat misleading title as this classic text of advice on Buddhist practice comprises two volumes and 687 pages in the Vajra Vidya edition which most people use, and 500 pages in the traditional loose-leaved pecha.

Turning to the text, His Holiness began at the final chapter in the first volume: Vast and Profound Light: Instructions on the Two Types of Bodhichitta. The chapter opens with a series of visualisations, and the Karmapa highlighted two elements: supplicating the lamas, who hold the lineage of the Bodhisattva Vows and the Stages of the Path, and considering the suffering of countless, myriad sentient beings.

“In order to increase our bodhichitta, we visualise the buddhas and bodhisattvas and supplicate them. Day and night we need to hold this unbearable compassion for all sentient beings.”

So how should we develop this ‘unbearable compassion’ which encompasses all sentient beings? To begin, we need to understand the different types of suffering which sentient beings experience: the suffering of suffering, the suffering of change, and the all-pervasive suffering of conditioned existence. Then, as Jetsun Milarepa said, when uncontrived great compassion arises it is as if we are in a pit of fire. Such a circumstance would be unbearable; we would immediately try to escape. So it is immensely difficult to develop such compassion. Whenever we recite, “May all sentient beings be happy…may they be free from suffering and the causes of suffering,” we need to check our minds to see the quality of our compassion, and then put effort into developing it further, with fervent devotion to the lamas.

His Holiness then read the next meditation, which visualises a charnel ground and the eight worldly concerns, in the presence of Sangye Nyenpa, whom we request to grant us the supreme and ultimate siddhis. By using this context to contemplate the eight worldly preoccupations–happiness and suffering, praise and blame, fame and infamy, gain and loss – we can develop revulsion for samsara and hence true renunciation, and then offer everything to the lama.

The First Sangye Nyenpa Rinpoche served as Mikyo Dorje’s tutor and root lama for only three years, but had a profound effect on the Eighth Karmapa, who showed great devotion towards him, which is why most of Mikyo Dorje’s works begin, “I prostrate to the Mahasiddha Sangye Nyenpa”.

Serving the lama can take four different forms: offerings, respect, service and practice. Materially, we can make offerings and provide food, drink, clothes and daily necessities for the lama. Serving with respect refers to prostrating before him, being humble in his presence, speaking softly and politely, and so forth. Serving with service includes such things as giving medicine, massage, or washing and anointing the lama’s feet. Serving the lama with practice can be differentiated between actual practice, when we follow the lama’s practice instructions exactly, and approximate practice, when we fulfil the lama’s wishes and commands.

Why should the Buddha’s teachings be preserved? Because they are the source of happiness and well-being. The teachings explain how we can develop the roots of virtue which are the ultimate source of well-being and happiness. They tell us what should be adopted and what should be abandoned. However, in order to achieve our aim for the Buddha’s teachings to spread to bring happiness and well-being to all sentient beings, we need a vast, long-term vision and motivation which transcends any concerns we might have for our individual monasteries, lineages and traditions. Now that all the Gunchö facilities for the monks were in place, the Karmapa concluded, it was their responsibility to use the opportunity well, holding the correct view and motivation at all times.
“If our aspirations and hopes are wrong, though we might think that things are going well at the start, in the end it will never work out well.”