The Eighteenth Kagyu Gunchö is Under Way 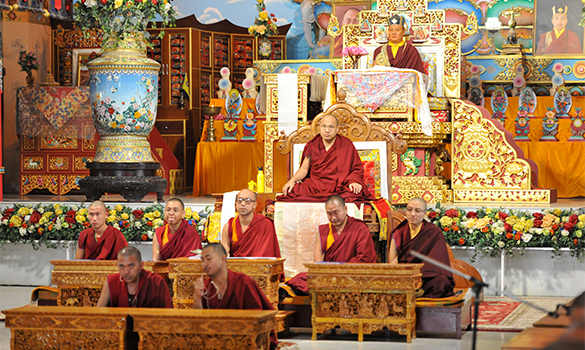 26 November, 2014, Tergar Monastery, Bodhgaya
Each winter, monks from Kagyu shedras [monastic universities] across India and Nepal gather together under the guidance of the 17th Gyalwang Karmapa to engage in a month of intensive study and vigorous debate. This annual event is called the Gunchö, a Tibetan word which means ‘winter dharma’. This is its eighteenth year. The 2014 Gunchö was inaugurated by the Karmapa on the 20th November, before he left for his teaching programme in Delhi, and will continue until 17th December. The eight shedras participating in the debate competition this year are: Karma Shri Nalanda Institute from the Karmapa’s seat in Rumtek; Lungrik Jampal Ling from Situ Rinpoche’s Sherab Ling Monastery; Rigpe Dorje Institute from Jamgön Kongtrul Rinpoche’s monastery in Lava; Vajra Vidya Institute, from Khenchen Thrangu Rinpoche’s monastery in Sarnath; Lekshey Ling, Chöje Lama Phuntsok’s Shedra in Nepal; Thösam Norling Gatsal, Bokar Rinpoche’s shedra; Tergar Ösel Ling from Mingyur Rinpoche’s monastery; and Zurmang Shedra Lungtok Norbu Gatsal Ling from Garwang Rinpoche’s monastery.

The Gunchö is funded by the Gyalwang Karmapa’s Office of Administration, but responsibility for organizing the practicalities rotates between the shedras. This year’s organiser is Karma Lekshey Ling Shedra, based in Swayamboudh, Kathmandu, Nepal. The shedra’s founder, the Venerable Choje Lama Phuntsok, was also the initiator of the first Kagyu Gunchö in 1997. The different shedras were geographically remote from each other, and he envisioned an annual gathering as a means to facilitate exchanges between them and raise standards in Dharma study and debate. The Gunchö began with just a few participants but has grown to become a major event in the Kagyu monastic year.

These days the Gyalwang Karmapa himself takes overall responsibility for planning the programme for the Gunchö, and each summer, he gathers together leading khenpos and teachers at his residence near Dharamsala, where they spend many hours and weeks discussing, debating and preparing for the event.

This year’s Gunchö includes
•An inter-shedra debate competition on the topics of Advanced Collected Topics, Types of Mind, and Types of Evidence
•Two days of special pujas;
•Teachings by the Gyalwang Karmapa on the Eighth Karmapa Mikyo Dorje’s text: One Hundred Short Instructions;
•A four-day conference on Lord Gampopa’s The Jewel Ornament of Liberation.

During this Gunchö, monks will study and debate from a text on Buddhist logic called the Dupa Chewa, compiled by the Sixth Shamar Rinpoche, Garwang Chökyi Wangchuk (1584 -1630), a renowned scholar who was tutor to the 10th Karmapa Chöying Dorje. They have been studying this text for two years now and they will conclude studying it this year.

During the Gunchö, the participants live in tents, replicating the life of the Garchen in Tibet, and eat from a communal kitchen. Breakfast includes specially prepared wholemeal rolls, baked under the direction of the Gyalwang Karmapa, who wished to improve the nutritional quality of the meals provided for monks and nuns during the Winter Debate sessions and the Kagyu Monlam. Class and group debates are held at the Monlam Pavilion, but the rounds of the debate competition itself take place in the shrine room of Tergar Monastery.

The Gyalwang Karmapa’s vision is that all Karma Kagyu shedras, for both nuns and monks, should attain the highest standards of rigorous study of Buddhist philosophy. The annual Gunchö plays an important role in raising the awareness of the monks and encouraging them to aim higher in their studies. Each day from 5.30am in the morning until 10.30pm at night, they follow a demanding schedule which includes private study sessions, group debates, class debates, teachings, and morning and evening prayers.

As one student monk said, “When we are in front of His Holiness, the judges and discipline masters, we all take extra care in the debate. Personally, I feel it is very meaningful as my insight increases more than in the past, and I learn so much in all aspects. I really feel very happy during the month, and I’m never aware how quickly the time passes.”