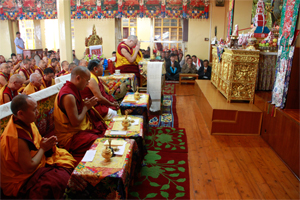 The Gyalwang Karmapa attended the morning session of the second day of the 11th bi-annual conference of religious leaders and representatives of the four schools of Tibetan Buddhism and the Bon religion, held in McLeod Ganj, Dharamsala.

In the morning, the Gyalwang Karmapa along with the other delegates gathered at the main Tsuklagkhang temple for a one-hour prayer session led by His Holiness the Dalai Lama. All the members of the Central Tibetan Administration also attended the prayer session. Afterwards, the religious leaders, CTA departmental heads, Kalons and the Speaker of the Assembly adjourned to the Surya hotel for the conference, which was attended by His Holiness the Dalai Lama.

His Holiness the Dalai Lama spoke on several topics, including the importance of religious harmony, the transfer of political authority to elected leaders, and the issue of his own reincarnation.