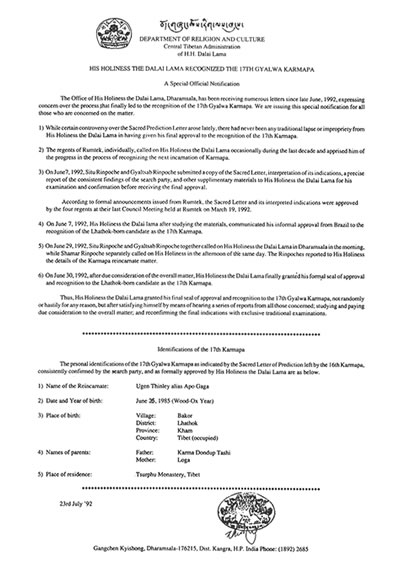 HIS HOLINESS THE DALAI LAMA RECOGNIZED THE 17TH GYALWA KARMAPA

The Office of His Holiness the Dalai Lama, Dharamsala, has been receiving numerous letters since late June, 1992, expressing concern over the process that finally led to the recognition of the 17th Gyalwa Karmapa. We are issuing this special notification for all those who are concerned on the matter.

1) While certain controversy over the Sacred Prediction Letter arose lately, there had never been any traditional lapse or impropriety from His Holiness the Dalai Lama in having given his final approval to the recognition of the 17th Karmapa.

2) The regents of Rumtek, individually, called on His Holiness the Dalai Lama occasionally during the last decade and apprised him of the progress in the process of recognizing the next incarnation of Karmapa.

3) On June7, 1992, Situ Rinpoche and Gyaltsab Rinpoche submitted a copy of the Sacred Letter, interpretation of its indications, a precise report of the consistent findings of the search party, and other supplimentary materials to His Holiness the Dalai Lama for his

examination and confirmation before receiving the final approval.

According to formal announcements issued from Rumtek, the Sacred Letter and its interpreted indications were approved by the four regents at their last Council Meeting held at Rumtek on March 19, 1992.

4) On June 7, 1992, His Holiness the Dalai lama after studying the materials, communicated his informal approval from Brazil to the recognition of the Lhathok‑born candidate as the 17th Karmapa.

6) On June 30,1992, after due consideration of the overall matter, His Holiness the Dalai Lama finally granted his formal seal of approval and recognition to the Lhathok‑born candidate as the 17th Karmapa.

Thus, His Holiness the Dalai Lama granted his final seal of approval and recognition to the 17th Gyalwa Karmapa. not randomly or hastily for any reason, but after satisfying himself by means of hearing a series of reports from all those concerned; studying and paying due consideration to the overall matter; and reconfirming the final indications with exclusive traditional examinations.

Identifications of the 17th Karmapa

The personal identifications of the 17th Gyalwa Karmapa as indicated by the Sacred Letter of Prediction left by the 16th Karmapa, consistently confirmed by the search party, and as formally approved by His Holiness the Dalai Lama are as below.