The Gyalwang Karmapa Arrives in Europe for His Third Visit 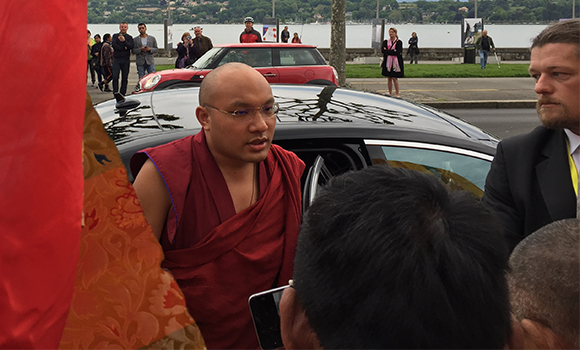 18 May 2016 -Geneva, Switzerland
During the late afternoon the Gyalwang Karmapa touched down for the first time at the Geneva airport in southern Switzerland with its soaring Alps. The Karmapa was formally received by Ringu Tulku Rinpoche, President of Karmapa Foundation Europe, Ngodup Dorjee, the representative of His Holiness the Dalai Lama, and Sangye Dorje, the President of Rigdzin Swiss Association, which is organizing the visit.
After this warm reception, the Karmapa and his entourage proceeded via motorcade to his hotel where Namkha Rinpoche, his followers, and the local Tibetan community joyously greeted the Karmapa in a traditional welcome with a sea of colorful brocade banners, pulsing drumbeats, and long white scarves undulating in the wind. At the edge of the driveway, a great umbrella of golden silk awaited the Karmapa to accompany him as he stepped from the car and walked through a corridor of well-wishers into the hotel.

On Saturday May 21 and Sunday May 22, the Karmapa will be teaching at the Theater of Geneva (Théâtre du Léman) on the topic of meditation and the source of inner peace. On Sunday morning, he will bestow a Medicine Buddha empowerment. A few tickets are still available here.