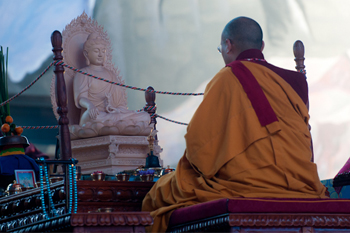 Sojong and the alms procession

5.30am and at the Monlam Pavilion, H.E.Jamgon Kongtrul Rinpoche was giving the Mahayana sojong vows. Meanwhile, at Tergar Monastery 500 metres away,  there was noisy bustle as laypeople arrived with their food offerings to find a good place on the circuit for the alms procession.

The Akshobhya Ritual at the Monlam Pavilion

After the alms procession, and the Twenty Branch Monlam, the  main focus of the day’s prayers at  the Monlam Pavilion was the Akshobhya Ritual.

Usually only ordained sangha  are involved in these prayers, although laypeople  attend the sessions.  Monks and nuns  performed  the  Akshobhya Self-Visualization,  the  Akshobhya Mandala Ritual, and the Reading the Akshobhya Sutra.

The theme of purification concluded with the recitation of the Dharani Sutra.

Before and during the Monlam, the organizers have been collecting donations to make prayers for the deceased and those living who are in great difficulty. The Akshobhya fire ceremony is seen as having a special power to help those who had died and are in the intermediate state of bardo.

From 4.00pm onwards, a group of monks began preparing the hearth in front of Tergar Monastery. This year has seen a change in the arrangements for this ritual.  Previously the first part of the ritual was conducted within the shrine room itself.  No one was allowed inside and devotees had to glimpse what they could through the windows.

The actual prayer ceremony started at 6.00 pm when His Holiness  arrived and sat on the portico in front of the main entrance to Tergar Monastery shrine hall, flanked by the Akshobhya retreatants. A painting of Akshobhya had been hung in front of the His Holiness’ throne. A table held rituals and tormas (ritual cakes) necessary for the ceremony.

Gyalwang Karmapa sat there facing the image of Akshobhya.

The 21 monks, nuns and laypeople who had been participating in the Akshobhya retreat were seated on the porch around the Gyalwang Karmapa.

Monks were helping with the fire ceremony. Two boxes were placed near the fire: one contained the names of the deceased and the other contained those of the living.

As His Holiness and the retreatants said the prayers, the attendants put the papers with the names of the deceased and the living in the fire. Monks worked the fire by pouring melted ghee over it, (clarified butter), and also ensured that the papers were burned. More sticks were fetched to the keep the fire going.

Hundreds of devotees and Monlam guests from around the world took part and witnessed the esoteric ceremony. Guards sat on the stairs leading up to the temple, ensuring that prayers were  conducted smoothly. No one was allowed to enter the porch.

Often the flames reached high, lighting up the faces of those witnessing the puja, clearly moved by the power of this ritual.

Ranged along two sides of the temple, members of the audience watched the ceremony and listened to the reassuring and calming sound of His Holiness’ voice. A scattering of people from around the world and of all colors sat on the lawns in front of the temple and filled the drive to the main gate.

At one point the electricity went off, in the ensuing darkness, the glow of the fire lit up the evening sky.

Finally, His Holiness led everyone in the recitation of the six-syllable mantra, Om Mani Padme Hung, with melody, creating a touching spectacle and a fitting finale to an elaborate puja which had lasted for more than a month.

Where words fail to communicate, rituals succeed, it seems.

Evening at the Monlam Pavilion

From Tergar Monastery, the sound of vigorous drumming could be heard, punctuated by the voice of the Gyalwang Karmapa broadcast over the sound system.  Another rehearsal was under way. His Holiness was checking personally that everything was in place for the long life offerings to H.E. Tai Situ Rinpoche and H.E. Gyaltsap Rinpoche the following morning, and supervising the rehearsal for the Marme Monlam the following evening.