The 17th Karmapa Arrives at Kamalashila 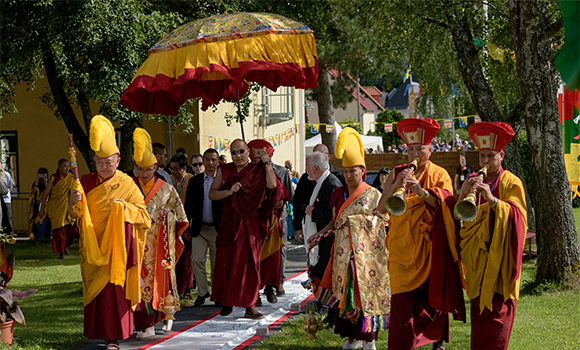 26th August, 2015 – Langenfeld, Germany
Mid-afternoon, His Holiness arrived at the Kamalashila Institute in Langenfeld, a small town set in the German countryside of Eifel, south of Cologne. He will spend one night here on his way to Bonn, where he will give Buddhist teachings, empowerments and hold audiences for his European students, in addition to giving two public talks.

A traditional golden procession, headed by Ringu Tulku Rinpoche, the Karmapa’s representative in Europe, received His Holiness and escorted him in his car into the institute. Nuns, monks and laypeople carried auspicious victory banners. Lamas blew Tibetan trumpets and beat their drums, and a monk walked beside the car, holding aloft the great golden parasol which symbolises royalty. Once within the grounds, the 17th Karmapa was welcomed warmly by Dzogchen Pönlop Rinpoche and Horst Rauprich, president of the Karma Kagyu Gemeinschaft, the German organisation which has sponsored and organised this His Holiness’ second visit to Europe.

Shortly afterwards, a specially invited audience of 180 guests from Karma Kagyu centres across Europe gathered in the shrine hall for the welcome ceremony, celebrated with Tibetan butter tea and sweet rice, which had been prepared specially by a group of Bhutanese who are resident in nearby Bonn. The guests of honour were Dzogchen Pönlop Rinpoche, Ringu Tulku Rinpoche, Lama Yeshe Losal Rinpoche and Lama Gyurme from Paris, as well as a group of sponsors, and the Mayor of Langenfeld.

Lamas from Kamalashila Institute made the mandala offering; Dzogchen Pönlop Rinpoche, Horst Rauprich and the board members of the Karma Kagyu Gemeinschaft made the body, speech and mind offering.

In a short speech, delivered mainly in English, His Holiness first expressed his joy at being able to visit Europe once more, and thanked the Indian Government, the Tibetan Government-in-Exile and the German Government for making the visit possible. “It fills me with great delight to be able to come to this beautiful village of Langenfeld again,” he added.

He explained that causes and conditions had led to both his European visits being based in Germany; however, his hope was that in the future he would be able to visit more European countries.
“Don’t be jealous!” he joked. “This is just the starting point.”

In the evening, His Holiness held a private meeting with members of the Karma Kagyu Gemeinschaft to discuss their plans for future development and then went for a walk through the famous Eifel landscape of green fields, rolling hills and dense forests.