Teachings on the Jewel Ornament of Liberation 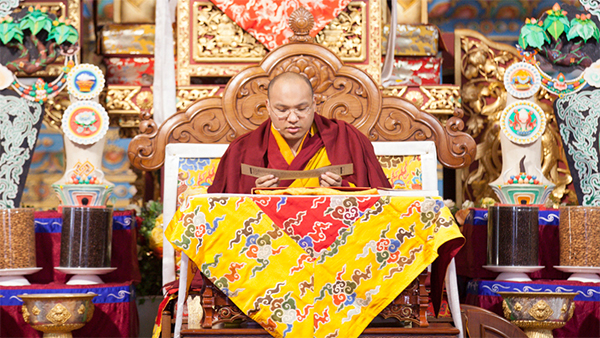 Throughout eight days of teachings during the inaugural Arya Kshema Winter Dharma Gathering the Gyalwang Karmapa covered the first five chapters of Gampopa’s Jewel Ornament of Liberation. Beginning with developing a deep appreciation of our precious human life, through to the importance of contemplating impermanence, and understanding the manifold sufferings of samsara, he taught the gathering daily—sometimes twice daily—in a rain of pure dharma.

The enlightened wisdom of the Kagyu founding master Gampopa flowed effortlessly out through the Gyalwang Karmapa’s own enlightened speech as he progressed through the text, which is known as the earliest Lamrim text on the stages of the path to enlightenment.

The Gyalwang Karmapa spent several sessions exploring the topic of the spiritual master in detail, and the importance of correctly relying upon and entrusting oneself to a qualified teacher. The qualities to look for in a spiritual master include great wisdom, compassion that can lead students without bias, and no attachment to this life, he explained.

“The benefits of following a spiritual master are deeper than the ocean and vaster than the sky. We should think about all the benefits that can arise,” he told those gathered.

And yet, he continued, the spiritual master is only fifty percent of the story. The other fifty percent is up to us – the disciples.

“We need to realize that the student and the lama are equally important. If there is a good spiritual master but not a good student then nothing’s going to happen, and vice versa. There has to be balance between the two.”

“When we think about the student and master, it’s like the two wheels of a bicycle. If one of the wheels is broken, then no matter how sound the other wheel is it won’t be able to go anywhere. Whereas, if we have both wheels on the bicycle we can go wherever we like. Similarly, there is no greater or lesser in importance between the master and student.”

When later exploring the topic of impermanence, the Gyalwang Karmapa turned to the natural world around us as a powerful teacher.

“We can learn about impermanence by looking at the skies and the seasons. If you know how to look and see the stars moving in the sky and the seasons changing, you can come to an understanding of impermanence from this. You can get a feeling of what impermanence is, without anyone saying anything about it. This is a teaching that is not written in a book – it’s an actual feeling.”

He then bought the teaching on death and impermanence to another level, drawing the minds of his students to an awareness of this very moment of existence.

“Our human life is always passing away. When we think about how long we’re going to live, imagine that we had a clock that said, ‘this is the 70 years that you have, while this is the amount of time already passed’. It shows us each minute, each second, of how much time we have left. At first it seems like we have a lot of time, and we do. But each moment passes, and finishes.”

“The past is over—it’s already done. Every split second that goes by is past. We don’t know what’s going to happen in the future. So the only time that we have is now. Thinking like this about impermanence really encourages us towards dharma practice.”

Stopping occasionally to point out places where there were errors in the Tibetan text, the Gyalwang Karmapa announced that at the end of the year, during the 18th Kagyu Gunchö Debates, he will convene a special conference on the Jewel Ornament of Liberation. Khenpos and students from different shedras will research and examine the text very carefully and critically, focusing on clarifying the errors that have crept in over the centuries. If the review goes well they may produce a critical edition of the text, together with updated translations into English and Chinese.

“This text is a jewel for all the Kagyu lineages,” he said, “not just for the Karma Kagyu, and it would be very beneficial to study it more.”

As the teachings wound to a close on the final day, the Gyalwang Karmapa directly addressed the nuns taking part in the first Arya Kshema Winter Dharma Gathering.

He observed that despite having had the flu, he had been able to continue offering dharma teachings throughout the eight-day gathering. Moreover, each day people had also spontaneously made material offerings.

“From beginning to end I’ve been able to give you this offering of dharma without missing any days and I feel good about that. We’ve also had daily material offerings. Neither the dharma offerings nor the material offerings have been interrupted, so it feels to me like this Winter Dharma Gathering has been complete, both internally and externally.”

He then commented that now the nuns had begun studying logic, the Geshes and Khenpos had already told him they were doing very well.

“As the great masters of the past say, it’s important to examine whether the first link of interdependence is good or not. This is the nature of interdependence—if the initial link goes well, all the rest goes well. Here, the first link of the Winter Dharma Gathering has gone very well. I think this is great sign that the teachings of the Buddha, and particularly of the nuns’ dharma, will go very well. This is a most excellent sign.”