Source of peace and blessings: His Holiness inaugurates the stupa at Kamalashila 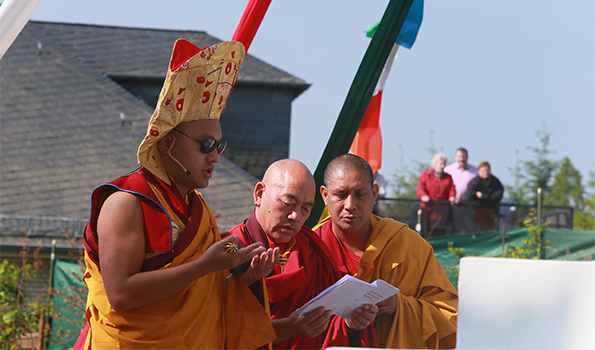 More than five hundred people, invited guests, volunteers and staff, gathered in the grounds of Kamalashila in front of the stupa for its inauguration by His Holiness the 17th Karmapa. After several days of cloud and some rain, the weather had cleared and the brilliant -white stupa with its gold-plated copper pinnacle stood proud against a bright blue sky.

The stupa – chorten in Tibetan –is a unique religious architectural form, representing the physical presence of Lord Buddha, and of great significance in several Buddhist traditions, including Tibetan Buddhism. There are eight designs of stupa, each symbolising an important event during the Buddha’s lifetime. The stupa at Kamalashila celebrates the Buddha’s Enlightenment. A niche in the upper section of the central shrine contains an image of Lord Buddha with his right hand in the bhumisparsa mudra. Translated as ‘touching the earth’, it is the hand position which signifies the moment of the Buddha’s enlightenment. His left hand holds an alms bowl.

Above the pinnacle, there is a stylized parasol, the symbol of kingship and also of protection, and, at the apex, are the twin symbols of the sun and the moon, which represent wisdom and method respectively.

The shrine room inside the Kamalashila stupa contains an image of Sangye Menlha, the Medicine Buddha, which makes it very unusual. It was placed there on the explicit instructions of His Holiness the 17th Karmapa, as it seems that he wished the stupa to be in harmony with and enhance the healing activities which have existed in this area for two thousand years or more, since the time of the Celts. [For more details read the earlier post: The Healing Continues: The Medicine Buddha Empowerment.] On reflection, it seems very fitting that the stupa should house Sangye Menlha. Kamalashila Institute has a growing role in this local healing tradition. It regularly offers training courses in mindfulness meditation for health professionals and is connected with the hospice movement. It also holds courses and seminars in Buddhist psychology and psychotherapy.

The construction of a stupa is very complex, requiring knowledge, experience, and competence, so Kamalashila Institute enlisted the expertise of Lama Phuntsok, from Karma Lekshe Ling Monastery, Nepal. He drew up a schedule for the construction, and visited regularly to supervise. In 2005 Kyabje Tenga Rinpoche laid the foundation stone, and Kamalashila began preparing the religious objects which would be needed to fill the stupa. The steeple, the wrought metal grid protecting the niche, and both Buddha statues were made by master craftsmen in Pathan, near Kathmandu, Nepal, a town famous for its skilled metal work and source of the very best quality Buddhist images.

The 17th Karmapa arrived in procession and took his seat in front of the entrance to the stupa. Horst Rauprich, President of the German Karma Kagyu Society, opened the ceremony with welcomes, an expression of gratitude to the Karmapa, and a history of the stupa’s construction. Most of the audience were sheltered from exceptionally bright early summer sunshine by a canvas awning, but His Holiness was sat gazing directly into the sun, and caused much amusement as he playfully put on his dark sunglasses.

In a short speech, the Karmapa reflected on why Buddhists build stupas. They are a physical representation of the Buddha’s body, speech and mind, so erecting one brings merit and also auspiciousness to the land. They are a source of peace and happiness, a blessing for the surrounding area.

Assisted by the ritual master, the resident lamas and other monks, His Holiness then performed the consecration ceremony. He circumambulated the stupa clockwise, chanting prayers and mantras, while scattering rice and ringing his bell. After more prayers, including offerings, he donned his gold brocade Gampopa hat, and undid the wide white ribbon stretched across the entrance to the stupa. [In Tibetan custom it is inauspicious to cut the ribbon.] He then made offerings to the Medicine Buddha, after which the ceremony concluded with prayers of a second circumambulation; the Karmapa rang his bell, recited mantras and scattered flower petals as he walked.

The consecration and inauguration ceremony concluded with prayers for auspiciousness and dedication of the merit created by the event. Then His Holiness walked inside the stupa, as a choir sang “Karmapa Khyenno”.

PRAYER FLAGS FOR THE WORLD

Now, it was the turn of the children to perform a very special prayer flag ceremony.
Several months previously an appeal had gone out worldwide for hand-made prayer flags. Several hundred had been collected, many of them made by local schoolchildren. The project co-ordinator, Elina Bochem, explained the vision that prompted the project: “The stupa represents the heart of the Buddhist community, connecting people beyond borders. Home is where the heart is and this will be a home for all.”
In the words of Jetsun Milarepa: “My temple is an un-named heritage; my patrons are men and women everywhere.”

Four children, assisted by the Karmapa and the project organiser, strung the prayer flags between the four white poles standing at each corner of the base of the stupa. The prayer ceremony was accompanied by the choir singing “Our World”, a song written and composed by His Holiness, which expresses the commonality of human experience, how much humanity owes to the planet earth, and contains the promise to protect her.
The ceremonies were over. The crowd drifted away, though some devotees remained to perform their own circumambulations of the stupa. It was Sunday, and, from the nearby Catholic Church, peals of bells had punctuated the morning’s celebration.

Half-an-hour later, the Karmapa slipped out of Kamalashila and walked down to the church, to greet the priest and the villagers who have so warmly welcomed him here. Entering the church, in a gesture of inter-faith understanding, mutual love and respect, he stood thoughtfully in front of the shrine to the Virgin Mary and offered a khata.