The Karmapa’s Office of Administration joyfully announces that His Holiness the Seventeenth Gyalwang Karmapa, Ogyen Trinley Dorje, will visit the United States from May 15 through June 2, 2008. In late February, we received confirmation from the Government of India via Mr. Tempa Tsering, Representative of His Holiness the Dalai Lama in New Delhi and Cabinet Minister of the Tibetan Government-in-Exile, and Mr. Tashi Wangdi, Representative of His Holiness the Dalai Lama to the Americas. The formal announcement is linked here.Click on the image to the right to go to the announcement of His Holiness the Gyalwang Karmapa’s preliminary travel schedule in the United States, which has been released by the Karmapa’s Office of Administration, United States. This schedule is being provided for travel and vacation day planning. Since confirmation of the trip was only recently received, the schedule currently being made available is necessarily preliminary and subject to change. The final confirmed schedule will be posted by our office as soon as as possible. 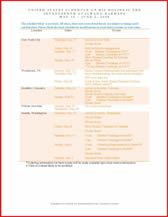