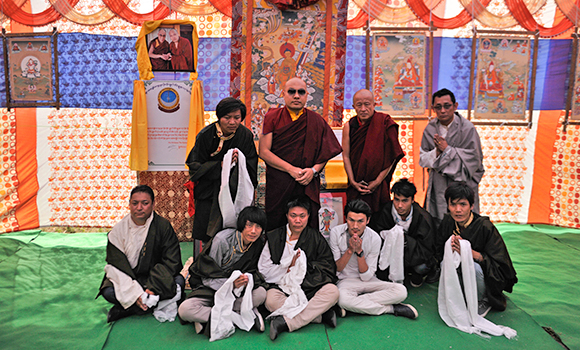 November 20, 2016 – Bir, Himachal Pradesh, India
After lunch at Dzongsar Khyentse Chökyi Lodrö Institute, the Gyalwang Karmapa and Khyapje Dzongsar Khyentse departed for the nearby Tibetan Colony of Bir. Their first stop was an exhibition of paintings in the Karma Gardri (the Karmapa’s encampment) style. Under the guidance of Kelsang Dorje from Derge, a group of seven young painters from all over Tibet had formed a new organization, called the Park for the Flourishing of the Tibetan Karma Gardri Traditional Art of Thangka Painting.

The Karmapa inaugurated their initial exhibit by signing a poster-sized letter commemorating the occasion as well as a painting of White Tara and the central thangka of the Buddha Descending from Tushita, which celebrated this very day in the Tibetan calendar. An artist himself, the Karmapa walked around the entire exhibit looking carefully at each of the paintings and sometimes asking questions of the painters.

Afterward he was invited to a spacious tent nearby for tea. From here he addressed the large group of mostly Tibetans who had assembled for the occasion in their best dress. The Karmapa first thanked the painters for arranging this exhibit of their Karma Gardri thangkas and also for creating an organization to preserve and develop this remarkable tradition.

The most extensive descriptions of this style, the Karmapa commented, are found in Jamgon Kongtrul Lodro Thaye’s Treasury of Knowledge in the section about the fine arts, and in particular about painting. The Karmapa related that the Karma Gardri style was brought into being by the 8th Karmapa Mikyo Dorje (1507-1554), the 5th Shamar Kunchok Yenlak (1525 to 1583), and the 3rd Gyaltsap Drakpa Paljor (1519-1549). To know this history better, the suggested that much more research should be done based on a broad perspective.

In general it is taught that three learned and noble painters with the name Tashi—Cho Tashi, Karma Tashi, and Namkha Tashi—were the main exemplars and proponents of the Karma Gardri tradition. The Karmapa noted that Cho Tashi and Karma Tashi lived during the same century but Namkha Tashi lived between the time of the 8th and 9th Karmapas, and so their education and their way of painting differed somewhat.

Among the three, the Karmapa said, it seems rather certain that Cho Tashi created the more than fifty paintings (the entire set did not survive), which belong to the Drukpa Kagyu Golden Garland and found at Kampa Gar. There is also scriptural attribution for these, so the Karmapa concluded that one could say they are by Cho Tashi. On the other hand, the Karmapa commented, we do not seem to have any paintings by Karma Tashi that can be confirmed as his.

The life story of Situ Chokyi Jungne (or Situ Panchen, 1700-1774) speaks of Namkha Tashi’s way of depicting the eight main bodhisattvas, which this third Tashi seems to have often painted. In museums around the world, there are many thangkas illustrating these eight bodhisattvas, and among them, the Karmapa thought that there might be a painting by Namkha Tashi or perhaps copies of his work.

Speaking more generally of the rime tradition, the Karmapa commented that creating thangkas is not just a question of being skilled enough to paint an image, but one should also study the philosophical systems, the tradition’s view and practice, and its lineage of texts. To preserve the painting traditions of Tibet, he stated, we need to preserve the tradition in its entirety. Further, the Karmapa noted, the painters who created the paintings on exhibit today are excellent artists, but this is not always the case with all the images on offer these days in Nepal and India. Since many of these new artists do not really know the Tibetan tradition of painting, it is important to preserve this heritage the Tibetans have received from their ancestors and their culture in general.

Nowadays cultural traditions are sharing with each other, the Karmapa observed. In the past Tibetans have said, “This is a jewel from my Tibetan cultural heritage, and I’ll not give it out.” But now is a time of cultural exchange. We imitate what others are doing and they imitate us, so it is not just the Tibetans who are practicing in these traditions. However, he cautioned, we do have responsibility to protect and sustain the Tibetan traditions.

To illustrate this, the Karmapa drew an analogy to the custodian (chos bdag) of a terma or rediscovered text. This holder of the terma is not the only one allowed to do the practice, but certainly does represent the main one who takes care of it. In the same way, the Tibetans are the ones responsible for their traditional fine arts. If they do not take care of them, these arts will lose their roots or others could take them over. The Karmapa emphasized again that Tibetans need to preserve not only their tradition of painting, but also their philosophical traditions, history, and culture. We all have to work together, he urged, and make efforts so that these do not decline. With this encouragement, the Karmapa concluded his talk with thanks to the organizers and the group of young painters and their teacher. The Karmapa then walked a short distance across the road to bless a new medical clinic for the local population.

The Karmapa’s final destination was Deer Park, the original Dzongsar shedra (monastic college) and now a place of retreat and conferences. With Dzongsar Khyentse leading the way, the Karmapa visited the Manjushri Hall, enshrining an unusual statue of the deity with a seemingly irrepressible smile just starting to emerge. Afterward they stopped by the kids’ playroom on their way to have tea on the veranda of the restaurant. The atmosphere was light and informal, the tea coming in an earthy French blue pot as the two Rinpoches conversed across the table. It was a lovely way to end this special day.