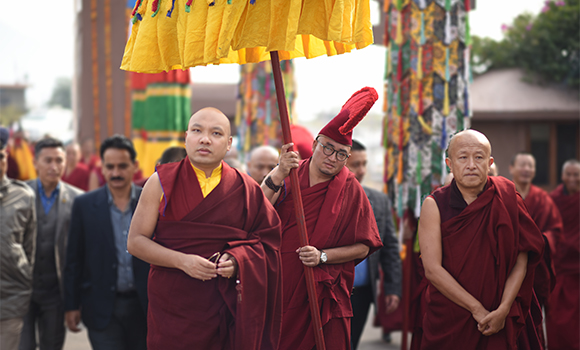 November 20, 2016 – Chauntra, HP, India
On this auspicious day of the Buddha’s Decent from the Realm of Tushita, which is one of the four major Buddhist holidays, the Gyalwang Karmapa traveled in the morning to Dzongsar Khyentse Chökyi Lodrö Institute to give diplomas to four new khenpos (professors and future abbots). Usually the head of the lineage performs this ceremony; however, to signify the close relationship between the Karmapa and Khyentse lineages, Dzongsar Khyentse Rinpoche kindly invited the Karmapa to take this role.

For this special occasion, the wide path from the main gate of the Institute to the shrine hall was decorated with the traditional eight auspicious symbols, made of crushed stones in brilliant colors and lined on either side by a double row of marigolds.
Walking down this path under a golden umbrella, the Karmapa entered the spacious shrine hall, which was filled with monks and lay practitioners from all parts of the globe. Students from the nearby Suja and Sambhota TCV Schools were also present.

Once the Karmapa was seated on an elegant throne before a tall, radiant Buddha, Dzongsar Khyentse Rinpoche gave the traditional mandala offering along with the representations of body, speech and mind, followed by a long golden scarf. Rice and tea were served to everyone while the monks chanted the practice of the Sixteen Arhats, who are entrusted with preserving the teachings.

After a second mandala offering and ceremonial praise of the Karmapa, Gyaltsen Dargye welcomed the Karmapa and gave a talk on the meaningful and close connections between the Karmapa and the Khyentse incarnation lineages. [See below.]

His Holiness started his talk with thanks to Khyapje Dzongsar Khyentse Rinpoche for inviting him and recalled: “When I was still in Tibet, of all the collected works I read, the one I Looked at the most was that of the first Khyentse, Jamyang Khyentse Wangpo (Pema Ösel Dongak Lingpa). I read it cover to cover and returned to it many times.” Khyentse Wangpo was truly rime (nonsectarian), the Karmapa stated. “These days saying ‘rime’ sounds good but often it is just ornamental, merely for show,” the Karmapa remarked. “To be a true master of these teachings is not at all easy. Many people are said to be experts, but if you look through history for a master of the teachings, you will find that Jamyang Khyentse Wangpo was an authentic one.”

Stating that “the rime teachings were important for cultivating a pure and encompassing outlook,” the Karmapa spoke warmly of the relationship between Jamgon Kongtrul Lodro Thaye and Jamyang Khyentse Wangpo: “In the predictions of the 5th Karmapa Deshin Shekpa (1384-1415), the coming of the Khyentse and Kongtrul incarnations was foretold, and Deshin Shekpa also prophesized that whoever made a connection with them would find it deeply meaningful.”

Continuing to speak of their inter-relationships, His Holiness remarked, “The Karmapa and Jamgon Kongtrul Lodro Thaye had a connection, a Dharma samaya, so close that they were almost one person with the same heart. Something similar can be said about the connection between the Karmapa and Jamyang Khyentse Wangpo—they were like one being in whom beat the same heart.”

His Holiness praised the present Khyentse Rinpoche’s way of giving advice, which the Karmapa described as “unambiguous, straight forward, penetrating, practical, and touching the heart.” Therefore, the Karmapa said, “I have true devotion and pure vision for this lineage. I am very happy that I could meet Khyapje Dzongsar Khyentse Rinpoche here at his seat with all the khenpos and students, and that I could be present with everyone in a single mandala.”

His Holiness continued to explain that the Karmapas also have a close relationship with the Sakya lineage in general. The 6th Karmapa, Thongwa Donden (1416-1453), received teachings on the sutras from the great Sakya master Kunkhyen Rangton Chenpo, who in turn said about the Karmapa, “I have a student who is an emanation of the Buddha.” Karma Trinleypa Chenpo, who held both Sakya and Kagyu lineages, was a student of the 7th Karmapa and a teacher of the 8th. So it is clear that the commentarial lineage in the Karma Kamtsang has roots in the Sakya tradition.

In general, the Karmapa remarked, these days we have available to us most of the outer and inner positive conditions, and the negative ones are few and far between. If we are able to muster our abilities and take advantage of these, then everything needed is present. To engage in studies and bring them to their fullest measure is extremely important he said.

Turning to the way of studying, the Karmapa affirmed, “It is important to maintain our Tibetan traditions. Since we live in the 21st century, however, Tibetans should not just follow their own tradition, but also look into the way things are done in this present age. In particular, we should pay attention to how education is given and include history in our curriculum. “For example, we might study [Chandrakirti’s] Entering the Middle Way for a year,” he stated, “but if asked who translated this root text into Tibetan, we cannot answer because we have not looked into the historical background. This needs to change.”

“If we know about the generations stretching into the distant past,’ the Karmapa explained, ‘when we are looking at a text, a different perspective and feeling can happen. On the other hand, if we are not aware of the history and look straight off at the text, we will not know about the scholars who wrote it, or when and where they lived. We will just know their name, but not the relationships they had with other masters and what their life’s situation was. Without this knowledge, our understanding of a text is not complete. In Tibet, the way of learning traditions was outstanding, and yet, we also need to learn and take an interest in the contemporary ways of doing research and studying.”

The Karmapa remarked that in continuing the rime tradition of the Khyentse incarnations, the Dzongsar Institute does not follow one particular lineage but welcomes students from all different traditions and so it has a wide-ranging influence.

The Karmapa concluded with saying how fortunate he felt to have come and thanked everyone, especially Khyapje Dzongsar Khyentse Rinpoche, for whom he made the aspiration prayer that his activities flourish and spread widely. For his students in the monastic college, the Karmapa prayed that their minds be in harmony and their discipline be pure, and that they spend all their time in the Dharma activity of study and practice.

After awarding diplomas to the four new khenpos, the Karmapa had lunch at the Institute and then left with Dzongsar Khyentse Rinpoche for the Bir Tibetan Colony.

“The First Khyentse Rinpoche, Jamyang Khyentse [Pema Ösel Dongak Lingpa 1830-1893] lived during the latter years of the 14th Karmapa Thekchok Dorje (1797-1868) and the early years of the 15th Karmapa Khakhyap Dorje (1871-1922). It was during this time that the Dharma and samaya connection between the two lineages began.”

Khyentse Wangpo passed away in 1892, and of his five future emanations, the activity emanation was Jamyang Khyentse Chökyi Lodrö, born in 1893. His lifetime coincided with the later years of the 15th Karmapa and the early years of the 16th Karmapa. In terms of ordinary appearances, it is said that the 15th Karmapa did not meet Jamyang Khyentse Chökyi Lodrö; however, he made a connection with the Karmapa through a pure vision.

“In general there is no doubt that between the successive incarnations of the Gyalwang Karmapa and the incarnations of Je Khyentse, there were extensive outer, inner, and secret connections that were both ordinary to worldly eyes and extraordinary.”

After awarding diplomas to the four new khenpos, the Karmapa had lunch at the Institute and then left with Dzongsar Khyentse Rinpoche for the Bir Tibetan Colony.[Best_Wordpress_Gallery id=”21″ gal_title=”Deep Connections between the Karmapa and Khyentse Lineages:”]