Official Notice from the Karmapa’s Office of Administration (Jan. 12, 2007) 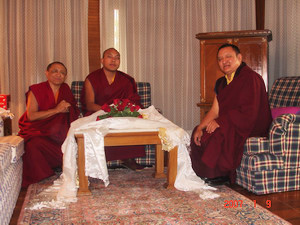 His Holiness Karmapa granted an audience to HE Shamar Rinpoche at the Oberoi Intercontinental Hotel in New Delhi on January 9, 2007

“Pursuant to this request, His Holiness the Seventeenth Gyalwang Karmapa, Ogyen Drodul Trinley Dorje, granted an audience to Shamar Rinpoche. The audience was held at 10 AM on Tuesday, January 9, 2007, in His Holiness’s room at the Oberoi Intercontinental Hotel in Delhi, India.

“No substantive issues were addressed or discussed during the audience.”

— From the General Secretary of the Karmapa’s Office of Administration
January 12, 2007