October Visit to Bokar Monastery in Darjeeling Go to Slideshow 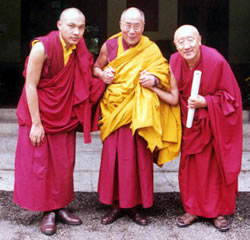 On October 4, His Holiness presided over the concluding funerary ceremonies for the Very Venerable Bokar Rinpoche at Bokar Monastery in Mirik, Darjeeling, India. His Holiness left Gyuto for Delhi, where he flew to the Bagdogra Airport in Siliguri, arriving at 1:35 PM. He was welcomed at the airport by Jamgon Kongtrul Rinpoche, Kalu Rinpoche, Gyaton Tulku Rinpoche, Khenpo Donyo Lodro Rinpoche, Drikung Gyalse Tulku, the Speaker of the Sikkim Legislative Assembly, members of the Sikkim Ecclesiastical Department and numerous other government representatives, Tibetan organization leaders from Sikkim, Darjeeling and other community leaders, and devotees from places such as Bhutan, totalling nearly 6,000 welcomers. (A more complete list of dignitaries meeting with His Holiness during his visit is at the end of this report). His Holiness was also welcomed by Adzin Choktrul Rinpoche, who offered him a ceremonial scarf.

Very Ven. Bokar Rinpoche passed into parinirvana on 17.8.2004 outside Mirik, Darjeeling. He was born to a nomadic family in Western Tibet in the year 1940. He was recognized at the age of four by His Holiness the Sixteenth Gyalwa Karmapa as the reincarnation of the previous Bokar Rinpoche. Bokar Rinpoche left Tibet at age twenty and at that time met the great meditation master Kalu Rinpoche.

Very Ven. Bokar Rinpoche was one of the most senior tutors of His Holiness the 17th Gyalwa Karmapa in exile, and taught him so much of the precious oral traditions, sutras and tantras. His Holiness the 17th Gyalwa Karmapa sent Ven. Drupon Ripoche and staff as his representative during the first part of the 49-day cycle, to pay final respects and to offer prayers to his monastery, Bokar Ngedon Chokhor Ling, in the Darjeeling District. During that initial part of the cycle of ceremonies, His Holiness led hundreds of monks at Gyuto in prayer. 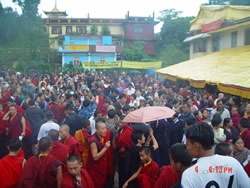 Some 40,000 devotees filled the Bokar Monastery area in Mirik to overflowing during the visit of His Holiness

After receiving permission to travel to Mirik for the concluding ceremonies for Ven. Bokar Rinpoche, His Holiness immediately proceeded to Delhi and then Siliguri. The Karmapa departed from Bagdogra Airport in a traditional procession led by monks from many monasteries, including monks from the Karmapa’s seat in Rumtek, and he then proceeded to Mirik. Upon arriving at Bokar Monastery at 3:30 PM, His Holiness was received by a formal procession that was headed by Gyaltsab Rinpoche and the monks from Bokar Monastery. His Holiness’s first action was to make aspirations prayers in front of the kudung (physical remains) of Bokar Rinpoche. His Holiness then withdrew to his quarters. At that time, he was offered a mandala along with tea and rice by Kalu Rinpoche and Khenpo Donyo Lodro. His Holiness then granted several private audiences to important local figures. 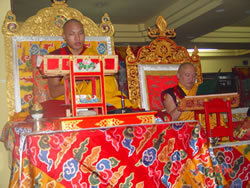 His Holiness Karmapa with HE Gyaltsap Rinpoche lead ceremonies in the presence ofthe kudung of Very Ven. Bokar Rinpoche

On October 5 at 5:00 AM, His Holiness led a liturgical practice in the presence of Bokar Rinpoche’s kudung. The liturgy consisted of chanting the Kagyu Gurtso, the collected songs of realization of the Kagyu masters known in English as the Rain of Wisdom. At 1:30 PM His Holiness address the monastics and laity who were gathered at the monastery, numbering nearly 40,000. He then bestowed an Avalokiteshvara empowerment and connected teaching upon the assembly. From 4:30 PM onwards, His Holiness continued to lead the ritual activities associated with the parinirvana cermonies for Bokar Rinpoche. This concluded the day’s activities.

At 12:00 PM, His Holiness departed for Siliguri, and in Siliguri boarded an airplane to Delhi. He then spent the night in Delhi and departed the next day for Gyuto Monastery in Dharamsala.