His Holiness received transmission and teachings at Gyuto from H.E. Gyaltsab Rinpoche throughout the summer. 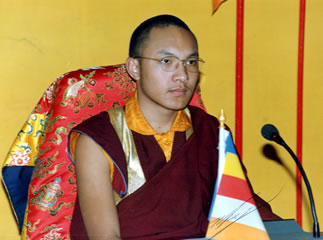 On June 26, the 17th Gyalwang Karmapa celebrated his birthday. The main guest of the ceremony was Kalon Tripa Samdhong Rinpoche, head of the government of Tibet in Exile. Also in attendance were Their Eminences Tai Situ Rinpoche, Gyaltsab Rinpoche and Khenchen Tsultrim Gyamtso Rinpoche, as well as various other Tibetan ministers and the members of the Kagyu Office administration. Born on June 26, 1985, His Holiness is considered 18 years old according to Tibetan traditions (which count a newborn as 1 year old at birth) and 17 years in the Western tradition.

On June 15, the Kagyu Office released a news bulletin about His Holiness’s wishes regarding pending litigation over a court-ordered inventory of sacred objects at Rumtek monastery. (Text of the press release)

Khenchen Tsultrim Gyamtso Rinpoche was in attendance at Gyuto in May and June, providing transmission and teaching to His Holiness.

On May 10, His Holiness visited Nyingtop Ling, a school for the handicapped in Norbulingka area, where he participated in a groundbreaking ceremony for a new building.