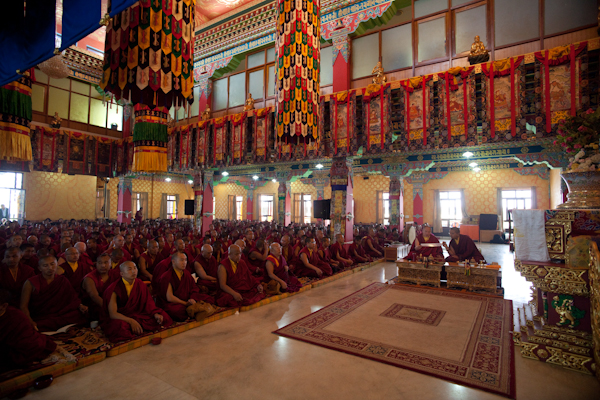 On the afternoon of February 13, after the Karmapa returned from the shrine room to his quarters, the sangha continued with the Mahakala ritual. Special to this day is the practice called “The Four Elements and Three Parts” (’Byung bzhi cha gsum), which removes obstacles for the practice of the next days. Pieces of roasted barley dough that bore the imprint of a hand were passed out to each participant. The dough was then rolled into a ball, flattened, and pressed to parts of the upper body that were ill. Divided into three, the pieces were returned to monks passing through the sangha with large containers. While the text of the practice was being chanted from two screens in front of the hall, the collected pieces were carried outside, and the direction in which they were placed had been determined by an astrologer.

On the evening of the thirteenth, the main shrine hall was transformed into a protector shrine dedicated to the practice of Mahakala. An imposing suit of medieval armor, black and golden colored with intricate inlaid designs, now stands in front of the hall. Next to the main Mahakala altar with its impressive tormas are three rows of small black thangkas their drawings traced in sinuous gold. The offerings they depict are based on the text called “Offerings for Three Occasions” (sKabs gsum ma’i mchod pa) and include a variety of food, weapons, and clothes.

In the early morning of the following day, the Mahakala ritual began with the daily practice text. While mantras were being chanted, Gyaltsap Rinpoche continued to give the reading transmission while Jamgon Kongtrul held the reading lamp for him, the page turning luminous as if lit from within.

Conclusion of the Reading Transmission and Mantra Recitation

The reading transmission was finally accomplished during the morning session on 15 February, and the mantra recitation continued all day in the shrine room. Gyalwang Karmapa joined the assembly for the final session in the afternoon. Nearly a thousand monks and nuns crowded into the shrine room. Outside, on the veranda, every available space was filled with lay followers, craning their necks to peer through the few open windows and doors in order to catch a glimpse of the Gyalwang Karmapa, Kyabje Jamgon Kongtrul Rinpoche and Kyabje Gyaltsap Rinpoche.

Meanwhile, monks worked steadily to complete the preparatory work for the main ritual: inside the shrine hall, to the right of the podium, partially concealed by a blue silk screen, they were constructing a complex, twelve-foot high Mahakala torma called a dhö, which will be burnt after the Cham dances on 20th February. On the podium itself, monks were arranging the torma and other offerings.