Losar : The Year of The Water Dragon Begins 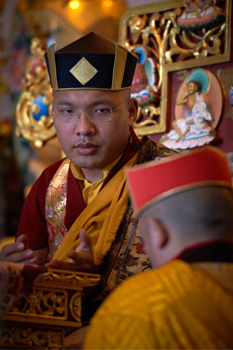 Tergar Monastery in Bodhgaya held its Tibetan New Year prayer ceremony on February 22, 2012. At around 7 am, two major lamas of the Karma Kagyu tradition, His Eminence Jamgon Kongtrul Rinpoche and His Eminence Gyaltsap Rinpoche, entered the shrine room to lead the prayers, the first day of the three-day Tibetan New Year prayer festival. Monks, nuns and laypeople expectantly queued outside as early as 6 am, entering the monastery’s main shrine room gradually at sunrise. Soon the monastery’s main hall was packed to the brim. Visible from the main door and the windows were hundreds sitting on the portico of the monastery, partaking in the celebrations from the outside.

The two lamas, sitting on thrones facing each other, led the prayers to clear away the obstacles and make an auspicious start to the new Water Dragon Year. The monks began to read from the texts, especially compiled by the Gyalwang Karmapa for the New Year prayer ceremony. At around 8 am, the golden beams of sunshine came rolling into the shrine room, enveloping the two rinpoches in its resplendent brilliance. At around 8:20 am, the two rinpoches left the stage to receive the Gyalwang Karmapa, who soon entered wearing his black activity hat. The assembly continued chanting from the prayer book while the rinpoches offered prostrations to His Holiness. Some time later monks came to offer Tibetan butter tea and traditional sweet rice.

At around 10:00 am, the prayers ended and the congregation formed long lines and waited patiently to receive blessings from and make offerings to Gyalwang Karmapa, Gyaltsap Rinpoche and Jamgon Kongtrul Rinpoche.

Those gathered outside were first to present traditional white Tibetan scarves and receive red blessing cords. An estimated 3500 people were there and the audience lasted for nearly two-and-a-half hours. The devotees were very diverse in terms of nationality and color. Some were new, and some were older students, and many of them – especially those from the Chinese diaspora – could be heard or seen reading from the Tibetan language prayer book.

Also present during the morning’s ceremony were Tibetan laypeople in colorful traditional dresses, celebrating the arrival of the Water Dragon Year and receive the blessings from the Gyalwang Karmapa. Several of them were from Tibet. In addition to sacred threads, participants were also offered a large crisp cookie called a donkey’s ear (Tibetan: bhungo amchoe khapsey) because of its shape. These Tibetan fried biscuits were especially prepared in a nearby hut before New Year at the rate of 700 a day…

On the second day, the sangha gathered in the Tergar shrine hall to share a meal with the Karmapa. The discipline master directed the monks to their places and the shrine hall was filled to the edge with the golden color of the chogu, the golden shawl of the ordained monks and nuns. On the evening, the Gyalwang Karmapa, Gyaltsap Rinpoche, and selected members of the sangha gathered on the portico of Tergar Monastery. His Holiness led the practice for this protector of Tsurphu Monastery in Tibet. Gyaltsap Rinpoche joined him in prayers for the protector who was first tamed by the Fifth Karmapa, Dezhin Shekpa.