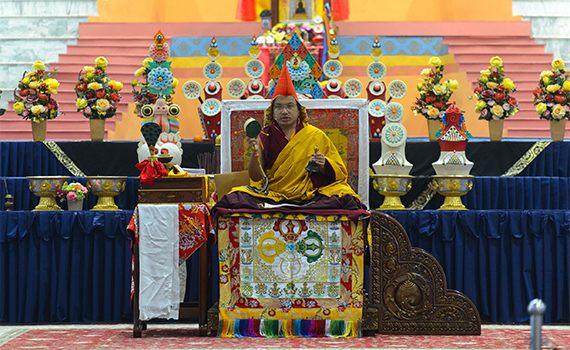 Long before the crowds arrived on day three for the empowerment of the Embodiment of the Three Jewels, or Konchok Chidü, at 6.15am the Gyalwang Karmapa was already in the Monlam Pavilion, seated on stage, quietly conducting the preparatory rituals.

By 8am the Pavilion was once more filled to capacity, this time with the slow chant of Guru Rinpoche’s mantra—Om Ah Hung Benza Guru Pema Siddhi Hung—resounding throughout the hall, while the Gyalwang Karmapa concluded the extensive preparations.

After taking a short break he returned to the Pavilion to start the empowerment proper, the gyaling horns that heralded his arrival harmonising effortlessly with the mantra-filled hall.

As the Gyalwang Karmapa set the boundaries for the mandala of the empowerment, the Monlam Pavilion was transformed from the ordinary into a vast, sacred space.

“In order to request the empowerment, please regard this place not as ordinary but as the Akanishta realm of the lotus display,” the Karmapa instructed those gathered, “and in its midst regard the empowering master as Guru Rinpoche himself.”

The Karmapa’s voice—that of Guru Rinpoche embodied—rang bell-like throughout the sacred space, the melodies flowing out from the stage and sweeping up the minds of all those present, lifting them into a higher, more sacred state.

All those present in the sacred space moved in synchronicity to kneel on their right knees, with palms joined at their heart. The sound of ten thousand voices reciting the bodhisattva vow—approached at the level most suited to each individual—filled the Karmapa’s vast mandala as he led those gathered towards the door of bodhicitta, and one step closer towards Buddhahood.

The Embodiment of the Three Jewels is a guru yoga practice, regularly practiced to this day throughout the entire Himalayas and Tibet. The practice was a ter or treasure discovered by the great terton or treasure-revealer, Jatson Nyingpo. Born in 1585, he lived during the time of the 10th Karmapa, Choying Dorje. His life was extraordinary, the Gyalwang Karmapa said, because he was a fully ordained monk or Bhikshu, which is rather unusual for tertons.

The 10th Karmapa was one of the most important people to receive this treasure practice directly from Jatson Nyingpo. In fact, the Gyalwang Karmapa told those gathered, the terton was instructed in a vision to offer this text to the 10th Karmapa, along with four sacred treasure items—representing the four activities—that were recovered with it: a golden Vajra, a silver bell, a coral vase and a turquoise mandala.

The empowerment wound onwards, and each of the tulkus seated on stage passed before the Gyalwang Karmapa’s throne to personally receive the vase blessing on the crown of their heads. The two heart sons, Kyabje Gyaltsab Rinpoche and Kyabje Jamgon Kongtrul Rinpoche waited until all the others had received it first, before finally taking their own turns.

The sacredness of the mandala deepened as the Gyalwang Karmapa brought the initiation to its conclusion, and led the minds of all those present into contact with the blessings of Guru Rinpoche, and the empowering essence of the Three Jewels.