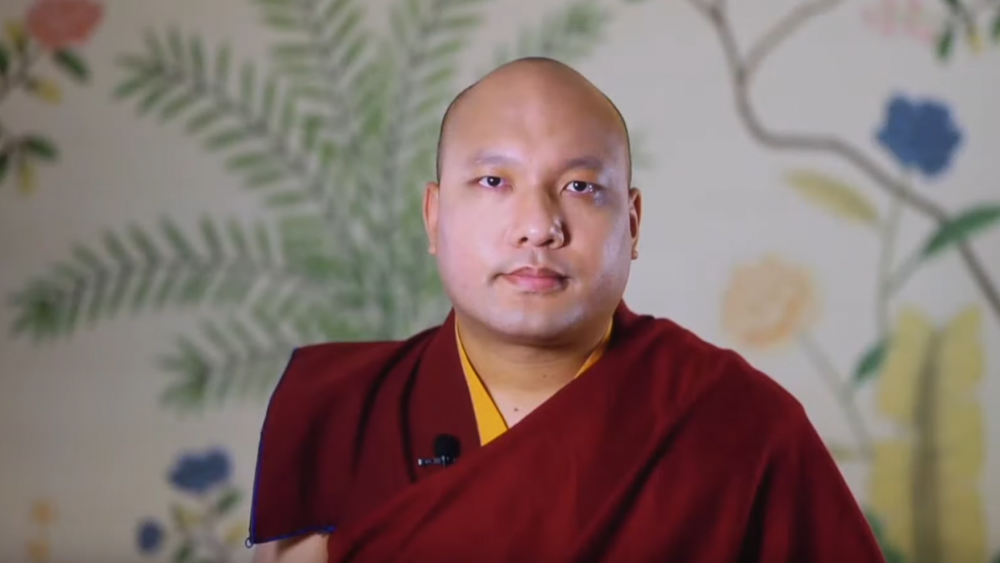 I hope all of you are doing well. Today is the sixth day of the Aspirations to End Adversity. Today we will recite the Praises of the Twenty-One Taras and two supplications to Guru Rinpoche, Clearing the Path of Obstacles and Spontaneous Fulfillment of Wishes together.

The teachings on Jetsun Tara were very widespread in India even in ancient times. For example, to this day, ancient images of Tara can be still seen at all of the sacred Buddhist sites, including Nalanda and Bodhgaya. In India at that time, it seems that everyone had great faith in and devotion to Tara, regardless of whether they were Mahayana or Foundation Vehicle practitioners.

In terms of Tibet, Jetsun Tara was Jowo Atisha’s yidam deity. At first, he had no desire to go to Tibet, but Tara made a prophecy and explained why he should, so he decided to go, as is described in his biographies. Tara is also a primary deity of the Kadampa school; she is one of their four main deities, the goddess of activity. These days, our main traditions of White Tara come down from the Kadampa school. Tara has been the yidam deity of many Tibetan lamas of all traditions, and many incarnations of the Karmapa have considered Tara their yidam deity. In particular, these Praises to the Twenty-One Taras are ubiquitous in Tibet, and all monastics and laypeople, young and old alike, recite them daily. Even illiterate people learn them by ear and recite them. When I was little, I remember my mother reciting Tara. She was illiterate but had learned it orally and recited it with a pure intention.

Regarding Jetsun Tara’s origin, there is not time to teach it at length today. But in brief, Tara is usually said to be an emanation of Avalokiteshvara, and in Tibet there is a tradition that both White and Green Tara were born from tears from his two eyes. In the Sutra of Manjushri Expanding in All Directions, translated into Chinese by the Indian master Amoghavajra, it is said that when Avalokiteshvara entered the samadhi of Tara, the appearance of all, from his right hand there shone light rays, out of which Tara arose.

There is a custom of revering Tara as an emanation of Avalokiteshvara or as Avalokiteshvara changing to a female form. For example, in some sutras and tantras, she is called by the names Tara Lokeshvara and Tara Avalokiteshvara. It is Tara who is said to offer protection from the eight dangers, and the White Lotus Sutra similarly says that Avalokiteshvara protects us from the eight dangers. To sum it up, the Mahayana teaches Avalokiteshvara embodies the compassion of all buddhas. He then arises in the form of Tara and becomes for us like the image of a loving mother. This allows us to be closer to her and have a stronger feeling. There are similar instances in many religions in the world. For example, in Christianity, many faithful people have especial faith in and regard for Mary, the mother of Jesus. I think this is similar to that.

Then we will recite two supplications to the great Guru Padmasambhava of Uddiyana. These two are the most common of the many different prayers to Guru Rinpoche. They are both termas, but there are different versions based on different terma texts that were revealed at different times. For the texts included in our prayer book on this occasion, the first, Clearing the Path of Obstacles, is based on the terma revealed by Tulku Sangpo Drakpa, and the second, Spontaneous Fulfillment of Wishes, is based on the terma revealed by Tulku Bakhal Mukpo.

There are versions of both these texts that were revealed later by the great tertön Chokgyur Lingpa, but it seems that the original tertöns to reveal them are the two whom I just mentioned. But neither of these two tertöns is all that well known, so I think many people probably have never even heard of them. Thus, in order to show gratitude to these two for revealing such important treasures as these, we have included them in our prayer books, and I have taken this opportunity to translate them into Chinese, though there is some room for improvement in some places. I hope that later, when they are right in all respects, I will be able to share them with you all.

Of these two, Clearing the Path of Obstacles is a supplication combined with the life story of Guru Rinpoche. Guru Rinpoche had a great influence on the spread of Buddhism in Tibet, and thus all followers of Tibetan Buddhism owe him a deep debt of gratitude. It is said that though he was kind to Tibet, his kindness went unnoticed. Unlike other Indian scholars and masters, there were many in Tibet who objected to and denigrated Guru Rinpoche. The reason this occurred is on the one hand that his detractors did not know his sources, scriptures, and reasons, and on the other, it is that a few of Guru Rinpoche’s followers seem to have had the fault of being overly zealous. In brief, if we were to say that Guru Rinpoche was only kind to the Nyingma school or that he belonged to the Nyingmas only, it would be mistaken. He was, as the Tibetan saying goes, the guru of all gurus, the sun of all suns. The second buddha Padmasambhava is not a guru for a specific school or a specific dharma lineage; he is like the universal jewel for all Tibetans, and I think it is important to keep this in mind.

It was during the reign of King Songtsen Gampo that the dharma was initially established in Tibet. He built the Pehar shrine in Rasa. Then dharma was practiced for five generations until King Tride Tsugtsen or Me Oktsom. After he passed away, some ministers from the Shang clan acted badly and the shrines and statues of the Three Jewels that had been built were destroyed. They said, “This southern Nepali dharma is not appropriate for Tibet,” and decreed laws prohibiting the practice of dharma.
Then, when King Trisong Detsen, still a youth, reached the age of twenty, he saw the reasons for practicing the dharma and repealed the old laws prohibiting dharma practice. He invited Buddhist masters and the king himself listened to dharma teachings and read dharma texts. His intention was to propagate Buddhism widely in Tibet, but at that time, many people thought that since Buddhism was not the old religion of Tibet, it would conflict with propitiating deities, harm everyone, and offend the gods. They thought it would interfere with politics and bring human and animal diseases, famine, and so forth. They had very strong suspicions and worries. Because of this, King Trisong Detsen summoned the kings of minor kingdoms such as Asha and the external and internal ministers to hold a council to discuss this thoroughly. First, they considered what the Buddhist scriptures mean. Second, they took their forefathers’ deeds as an example. Third, they investigated in great detail with the help and guidance of the Buddhist ministers and saw that not only was there no fault in practicing Buddhism, it was also very beneficial.

They saw three main reasons it would be beneficial. The first reason was that the meaning taught in the dharma was all excellent and that practicing it would accomplish excellent and unexcelled aim. Thus, it would not turn out badly; it could only turn out well. Second, one had to look at long term benefit and happiness; one could not say that short-term circumstances are an adequte reason to say dharma practice is inappropriate. Third, for many generations, their forefathers had practiced dharma, but nothing bad and no problems had occurred. For these three reasons, they agreed that there was no fault in practicing the dharma and had an edict inscribed with their commitment to not denigrate and not extirpate the dharma. The inscription can still be seen to this day.

Old manuscripts from the time of the kings call Guru Rinpoche, “Padmasambhava, the scholar from Uddiyana who achieved siddhi.” At that time, Guru Rinpoche was the most powerful siddha in India. Though King Trisong Detsen wished to propagate the dharma in Tibet, many internal and external obstacles arose, as did many bad signs and omens. They invited Guru Rinpoche, and he tamed the gods and demons, quelling all the bad signs and omens. He made the gods and demons enter people’s bodies, and they admitted their faults, saying that what they had done was wrong. People could not help being amazed and had to believe. Their earlier suspicions and wrong thoughts were all pacified. Thus his help and assistance to the king in spreading Buddhism at that time was an extremely great kindness.

Guru Rinpoche’s life story is taught in many different ways. Some say he was born miraculously. Some say he was born from the womb. There are also people who say that it is fine to say both—that he was born miraculously and also born from the womb. Regarding how long he spent in Tibet, people explain it in many different ways. Some say he spent three years in Tibet, some say six years, and some eight, twelve, or eighteen years. According to the termas, the shortest time is fifty years, and some say he spent over one hundred years. If these are explanations of visions of pure appearance, you can say as long as you like, but when trying to determine the order of historical events, it must be presented in terms of how it commonly appears to human beings. Thus, researching the Kama texts of the Nyingma and the actual ancient Tibetan historical documents and chronicles to establish the sequence of events would give confidence. In particular, there is a life story of Guru Rinpoche written by the Jonang Jetsun Taranatha called the “Indian” or the “Threefold Conviction.” It has some interesting, distinctive features, and I think it would be good for all of us to read it.

In brief, please have great faith and devotion in Jetsun Tara, the embodiment of the activity of all the buddhas, and in Guru Rinpoche, who is superior to all others in wisdom, love, and power during this degenerate age, and let us recite these prayers together.