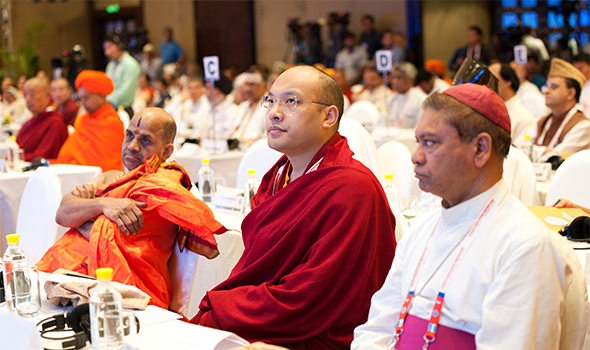 20-21st Sept, 2014 – Hyatt Regency, New Delhi.
The Gyalwang Karmapa, Ogyen Trinley Dorje, joined His Holiness the Dalai Lama and other Indian faith leaders this past weekend in Delhi for an unprecedented meeting—convened by His Holiness the Dalai Lama himself—for the spiritual leaders of India to agree to an action plan that would allow them to lead society in addressing major issues of the day. As a sign of the conference’s success in promoting harmony and consensus among the nation’s spiritual leaders, the two-day meeting yielded the Delhi Declaration of 2014, a document affirming their unanimous commitment to specific goals and outlining the measures they jointly agreed to undertake to accomplish those goals.

In convening the conference, His Holiness the Dalai Lama called on India’s religious leaders to join together to lead society on several urgent issues of our times, including: environmental issues, women’s empowerment, closing the gap between the rich and the poor, promoting human values within the education system, counteracting violence committed in the name of religion, and reassessing religious practices and ritual in light of the changing times. The conference coincided with the United Nations’ Day of Peace.

During his inaugural address, His Holiness the Dalai Lama said: “Some historians say that 200 million people were killed in the 20th century as a result of wars and violence. The 21st century must become the century of peace.” He called on religious leaders to assume responsibility for creating peace in their own communities and to work together to bring about peace between communities. “The time has come,” he said. “We should be more active.”

Echoing this vision of spiritual leaders’ potential to lead positive changes within society, the Gyalwang Karmapa said during the conference, “There is much we can do for the benefit of the future of the world.”

Noting that India has a 1000-year old tradition of religious tolerance, His Holiness the Dalai Lama further called on India to let the world know of its remarkable history and inspire the world with its example of diverse communities living in harmony. The nine distinct religious communities that have flourished in India—Hindu, Muslim, Sikh, Christian, Buddhist, Jain, Jewish, Baha’i and Zoroastrian—were represented at the conference by important leaders, including Pujya Swami Chidanand Saraswati, Maulana Wahiduddin Khan and His Eminence Cardinal Gracias.

Speaking during a roundtable discussion, the Karmapa underscored the cultivation of personal relationships, describing it as crucial to create the mutual understanding and trust that are indispensable for genuine harmony among religious groups. Too often, he said, greater emphasis is placed on the public image presented of the relationship between leaders of different religious orders.

“We need to improve relationships on a personal level, not just what appears to the public. Building trust and understanding is very important,” the Gyalwang Karmapa said. “For that, there should be a personal relationship.”

Also participating in the roundtable were 25 senior Hindu, Muslim, Christian, Sikh, Jain and Baha’i leaders as well as other Tibetan Buddhist lamas, including Taklung Shabdrung Rinpoche, head of the Taklung Kagyu order, and Thuksey Rinpoche of the Drukpa Kagyu order.

His Holiness the Dalai Lama spent time at each of the roundtable discussions, moving from group to group. On the first day, he took the opportunity to stress gender equality and to present his case for the need to review practices that are a matter of cultural circumstances and no longer suited to our times. “Times change,” His Holiness the Dalai Lama said. “Buddha basically gave equal rights to bhikshus and bhikshunis, but at the same time, when bhikshus and bhikshunis come together, the bhikshunis have to remain behind, even if it is a novice monk. I feel that is a cultural aspect. It is time to change these things.”

The conference covered the themes of environmental protection and women’s empowerment—causes that His Holiness the Dalai Lama has long championed within Tibetan Buddhism and which the Gyalwang Karmapa has actively worked to promote as well. In addition, His Holiness the Dalai Lama asked spiritual leaders to reach out to non-believers, and find ways to articulate their concerns in terms of secular values that could be shared by all.

During the plenary sessions, participants raised the issue of the potentially divisive effects of religious identities. A delegate publicly thanked His Holiness the Dalai Lama for entitling the conference “A Meeting of Diverse Spiritual Traditions of India” rather than “Religious” traditions.

“We have been talking about the difference between religion and spirituality,” the Karmapa stated during the discussion session. “I think all religions began from spirituality, because those who became founders did not just have philosophical views, but they had experiences: actual, lived experiences. I think we need to pay more attention to experience.”